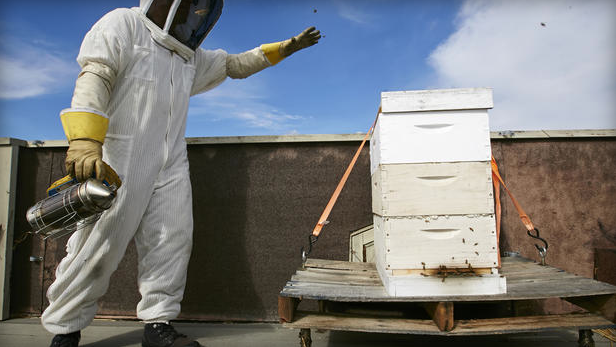 If you thought that people were the only ones attracted to LA’s favorable weather and laid-back lifestyle, guess again. Our city’s year-round sunshine and abundance of blooming flowers makes it an ideal climate for honey bees, the species responsible for causing quite the buzz in local government.

Last week, the Los Angeles City Council voted unanimously to begin the process of granting bees legal status in residential areas and also supported a motion to relocate wild hives when possible instead of destroying them. In doing so, the city hopes to encourage local agriculture while boosting the bee population in the safest manner possible.

Considering that there are around 10 hives per square mile in Los Angeles, it’s fair to say that bees occupy some of the most prime real estate neighborhoods around, which has caused a demand for a new breed of beekeepers to remove and monitor them. Tyson Kaiser's business, Sweet Bee Removal, charges $125 an hour for a hive extraction and once made $5,000 over three days removing a massive feral hive from a tile rooftop in one of LA's ritzier addresses. A similar niche business appeals to foodies obsessed with local ingredients by removing unwanted wild hives, relocating them to backyard bee boxes, and then harvesting rich honey that can sell for $110 a gallon.

Despite concerns over the aggressive nature of wild bees—known colloquially as Africanized “killer bees”—coming into contact with residents during the relocation process, the ordinance sided with advocators of backyard beekeeping who believe that these concerns are overblown and that the process can be easily managed by specialists.

Take a look at the full article here.