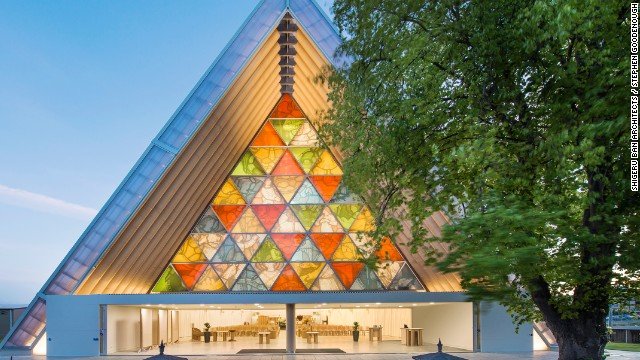 The Pritzker Architecture Prize is often thought of as the Nobel of architecture awards. Since it was established in 1979, its winners have included luminaries such as Frank Gehry, Philip Johnson, Zaha Hadid and Norman Foster. A new name was added to that list this week: Japanese architect Shigeru Ban.

While many of us think of architecture as the creation of permanent structures made of solid materials like stone, wood, steel, concrete and plaster, Ban has made a name for himself by creating temporary structures molded from more transient materials like beer crates and cardboard tubes. He’s designed and built disaster relief structures all over the world, including Rwanda, Turkey, India, China, Haiti and Japan after earthquakes and other natural disasters.

“His buildings provide shelter, community centers and spiritual places for those who have suffered tremendous loss and destruction,” the Pritzker jury said in its announcement. “When tragedy strikes, he is often there from the beginning.” Ban is also known for his work at the Pompidou’s curvaceous satellite museum in Metz, France and the brand new Aspen Art Museum that will be opening this summer, featuring an impressive exterior woven-wood screen.

"Shigeru Ban creates beautiful, functional and sustainable architecture with a conscience," says Susan Pekich, of The Agency. "His Metal Shutter Houses in Chelsea are a favorite of mine as is the Camper store on Prince Street, but his ability to lend innovative architectural solutions to places like Christchurch in the wake of major disasters puts him in a class all his own."

See more of Shigeru Ban’s structures in the gallery below:

The Agency’s “Eye On Architecture” brings you architecturally significant homes, buildings, concepts and designs from all over the world. Over the coming months, our team of agents will explore a wide range of architecture and design, with special editorial content and commentary offered by Billy Rose, President and Co-founder of The Agency, himself an architectural specialist.  We hope you will enjoy, share, Tweet, Pin, weigh in and otherwise let us know what you think!