A Brazilian Villa Ready For The World Stage 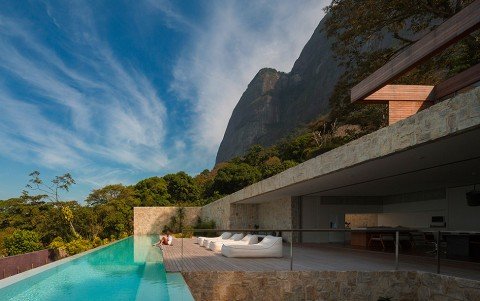 As the World Cup kicks off in Brazil this week, we thought we'd highlight an architectural home that hails from the host country. Built for Brazilian TV personality Alex Lerner, this villa scores on so many levels, from the carefully laid stones to the floor-to-ceiling sliding glass panels. Located in the vibrant city of Rio de Janeiro, it has become the secluded haven that Lerner was always searching for. 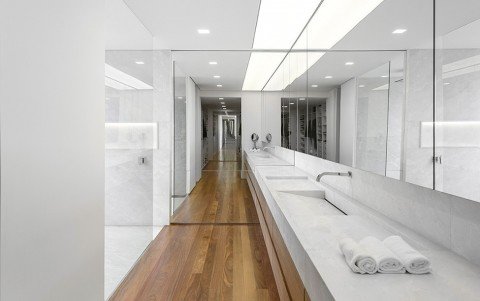 Once the land was acquired, Lerner turned to celebrated Brazilian architect Arthur Casa to carry out his vision of an immaculate, open-concept home. As The New York Times pointed out, “The house, flanked by Rio’s spectacular and iconic landscape, was designed with Lerner’s desire of living the same way he does when in vacation, often in St. Barts, when at home.”

Spread over 5,2000 sq. ft., the home is comprised of three levels with the main entrance located on the second level. Here, the living area extends out to the pool deck in one clean sweep, gathering stunning panoramas of the surroundings. The lower level houses two apartments appointed for the maid and the gardener as well as two additional guest rooms. 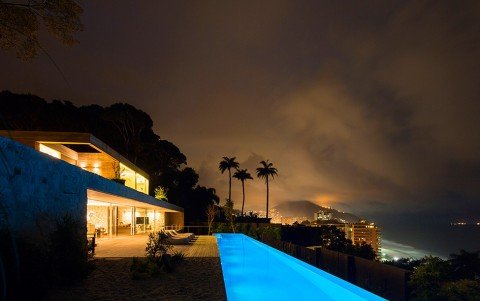 A deep love of the water meant that the home would boast a spacious, spectacular pool. This is where Lerner now swims four times a week as he enjoys views of Pedra da Gavea, a 2,769-foot granite dome that is a popular spot for paragliding. Another priority was ensuring that the house maintain cleanliness and tidiness, not just in design but in the materials themselves. For this reason, the floors and much of the millwork are cumaru, a hardwood that the architect chose for its innate toughness both indoors and outdoors. Of note are the unique stones used throughout the home, which had to be the same peach-beige-gray that Lerner had seen years before at the Western Wall in Jerusalem.

In addition to a sea of evergreen foliage engulfing this home is the actual sea itself – the omnipresent blue vastness serving as a source of calm and reflection. It is here, seated in a white poolside chaise, that Lerner can remove himself from the hustle and bustle of city life. To see more pictures, see the gallery below.