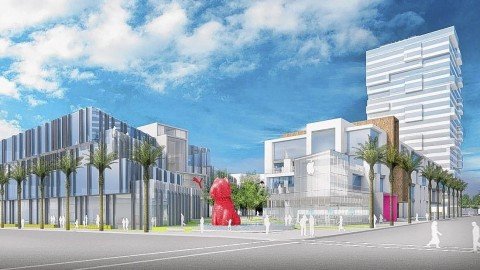 Los Angeles developer Kilroy Realty Corp. just unveiled plans last week for a 550,000 sq. ft. mixed use office campus near Hollywood’s famed Sunset and Vine. Comprising of three four-story buildings, including a 23-story apartment tower, the space will serve the growing number of young media and tech firms opting for Hollywood over Silicon Valley, and who have plenty of work but not plenty of workspaces.

“We believe there is a shortage of quality office space in Hollywood,” said Kilroy Executive Vice President David Simon. To fill this shortage, the yet-to-be-named “campus” will take up an entire city block and provide the type of setting that has become so popular among office design: relaxed with plenty of outdoor and indoor common spaces. The low-density campus would have about 40% of its four acres dedicated to open space so that creative firms in entertainment and technology feel right at home.

“Hollywood is an established outpost for creative firms, and the office market there is picking up momentum as the neighborhood and others around it gentrify,” said real estate broker Trevor Belden of Industry Partners. The buildings will be connected by a series of landscaped passageways running through the center of the campus, with some restaurants, bars and shops at ground level. Projected to be underway by early 2016, Hollywood definitely has something to look forward to.