A Conversation With Architect Barbara Bestor 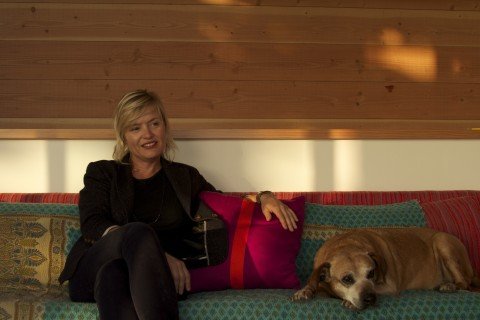 Over the past 10 years, Barbara Bestor’s work has spanned a broad swath of exceptional projects, ranging from smaller, mid-century inspired homes (such as the “Floating Bungalow”, the “House Over a Wall” and her own home resting just below Frank Lloyd Wright’s Ennis Brown Residence) in often hilly terrain in areas like Silverlake, Los Feliz and Topanga Canyon, to larger homes like “Toro Canyon," a successful marriage of landscape and structure on 160 acres in Santa Barbara (which The Agency currently has available for sale). Her work also extends to an array of commercial projects, including restaurants for Beachwood Café, Intelligentsia and Pitfire Pizza; retail space for Trina Turk, Claire Vivier, Roxy and Stussy; and offices for the likes of Beats By Dre.

Long considered the darling of Silverlake, Bestor has spread her wings and become a formidable force in the world of architecture, not just through her work, but also through her teaching of architecture at Sci-Arc (where she herself studied), UCLA, and now at Woodbury School of Architecture. In addition, Bestor is a scholar of repute in the history and lineage of architecture, a respected voice for female architects and the author of the book Bohemian Modern: Living in Silverlake.

We caught up with Bestor to get her thoughts on such topics as the progress of her work; the evolution of LA; women in architecture today; and the process of designing “Toro Canyon” in Santa Barbara. 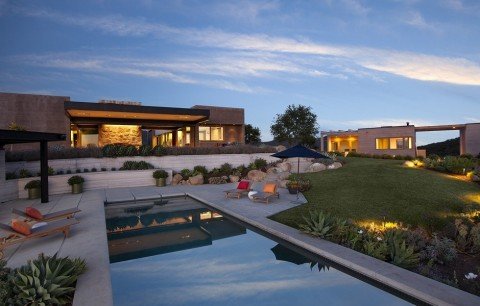 This is project that is very much about the landscape, site and views. Our approach was different than anything we have done before because it was in such a remote and beautiful, topographically challenging location. We were obsessed with the approach to the house, since we were able to design the road and access as well. So we were able to make a sort of slow reveal of the house and kept that sense of a journey going at the entrance to the first courtyard, all the way out to the staggering final view. Designing the procession and series of framed views was a luxury that urban settings have never allowed us to do.

You are a friend of the owners. Is it more difficult, or more personal, when you are designing a home for people you are close to, or are there advantages when you know a client well and know their particular likes and dislikes? 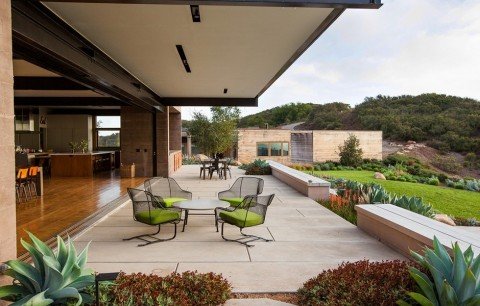 I think a project like this, that goes over several years, is a great new way to get to know people. I actually knew Christina and John more independently, before they knew each other, than I did in later years! So getting to know them as a couple, and how their creative, intellectual and lifestyle interests dovetailed and varied, was very fun and led to a lot of our more detail pieces -- the japanese garden and terrazzo steeping tub at the master bathroom, for instance. I find that designing houses for people is a very relationship-like endeavor, and I love the part of the work that is about artistic collaborations with cool people. They often turn into friendships as well.

The home was built to be a weekend getaway for the owners, as their primary residence is in Los Angeles. How does the fact that a home will be used a second or third home affect your design process?

Well, there isn’t anything more fun than designing second homes because a huge part of the program is about relaxing and having a good time! I have done a bunch of beach houses, as well as mountain houses, and I think that ultimately they share the same DNA as any of our other work -- but in a way it allows clients to focus on what they really, really want in their daily lives. 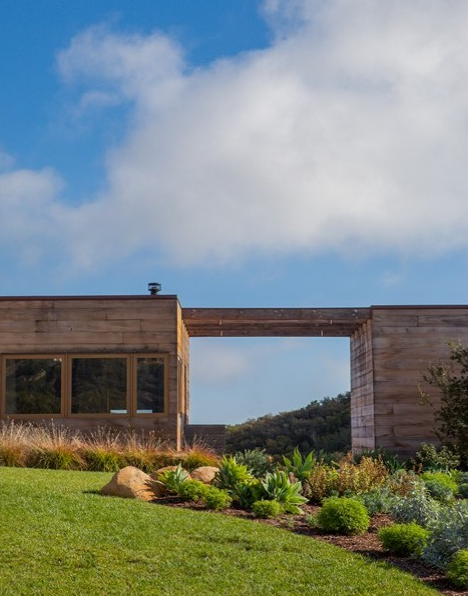 I think the 21st century house has very distinct differences from the 20th century norms, and I’m glad I got my feet wet in the last century, as both have a lot to offer us in terms of thoughtful architecture. For the present moment, a huge issue is the increasing informality of the home, from spatial arrangements like open kitchens and family rooms, to furniture itself becoming about comfort and visual interest and fun. I think contemporary design, from wallpaper to sofas, is very different, and also much more eclectic, than it ever has been in the past.

Another specific issue is of course the ecological awareness about energy consumption, material waste and so on, and I think everyone in my profession -- as well as city building codes, especially in California -- has really tuned in, learned a lot and radically changed our practices in the last decade or so. 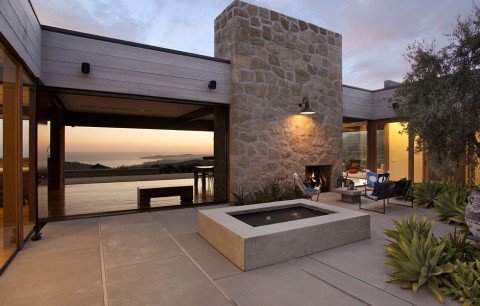 What particular challenges did you face in designing the home and how did you overcome those challenges?

I wanted to make the staggering view a real surprise to the visitor so there was quite a lot of devious subterfuge in the grading to make sure that the travelers on the road in did not get a sneak peek until they got to the house. Old tricks of landscape architecture and design.

The home is on 160 acres of land. How did you go about choosing the exact location on the property where you would design and build the home?

The property had a limited designated buildable area -- within that we designed our siting relative to the view and the sun. We were also making a lot of outdoor living areas so we designed ways to protect them from extreme weather conditions.

For someone who has never seen the house and property, how would you describe the experience of being there?

It is a very tranquil and luxurious place. The concrete and wood are tactile and feel almost ancient in their solidity. At the same time, the huge windows bring the mountains and ocean view into the main living areas, while the bedrooms and more private areas look inward to courtyards and more landscaped exterior moments.

What’s your favorite room in the house?

The living room, with the huge long table and the glass doors that completely pocket and open. It is like an earthy parthenon; very majestic but also very rustic and laid back.

We love the motto that you have for your office, which is “everyone should experience strange beauty everyday.” That’s something we’re blessed with a lot of in Los Angeles, isn’t it? 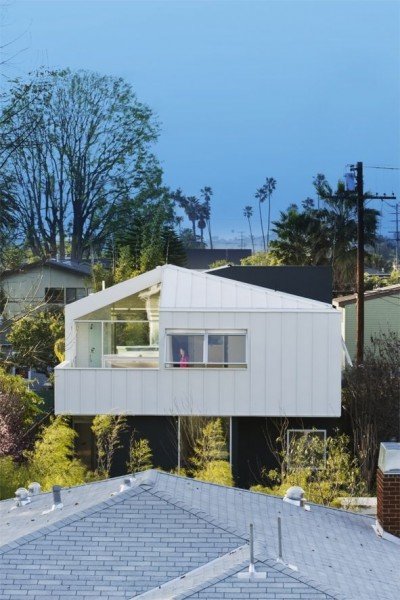 Yup. I think affecting how we live and experience our daily life is really the main outcome of architecture - the good kind and the bad kind! I think embracing beauty, while a bit unusual these days in a theory-driven world, is the strategy that I have found best as a designer of all sorts of buildings and spaces.

Los Angeles has such a tremendous architectural history. How do you feel about its future?

LA has been the hub of progressive architecture in America for at least 50 years now, so I don’t think that will change! But I do think the city will start to look very different in the next decade as we keep densifying the urban core. I think this is ultimately a very good thing. We will get better public transportation and efficiency as befits a city our size. I suspect though that the idea of houses and the texture we have of small-scale multiple family homes and varying sizes of single family ones will not change too dramatically at the same time as the major corridors do. I think we may have new layers of smaller new homes on small lots woven into the city fabric, but many of the great residential areas will just become more and more valuable as they stay individual homes.

What is it about LA that truly stands out to you when it comes to architecture and design?

We architects have a very open minded, creative and even eager audience here in LA. There really aren’t a lot of restrictions or too much context when it comes to building and each generation of architects has been able to build their ideas here - all of which coexist happily in what is perhaps the most amazing architecture living museum around!

I think the film business as “the business” has always helped our cause as there is such a clear valuing of new ideas and images and the changing interests of audience and technology in filmmaking that dovetails nicely with architects wanting to make new kinds of spaces and programs.

Favorite city to visit for inspiration? 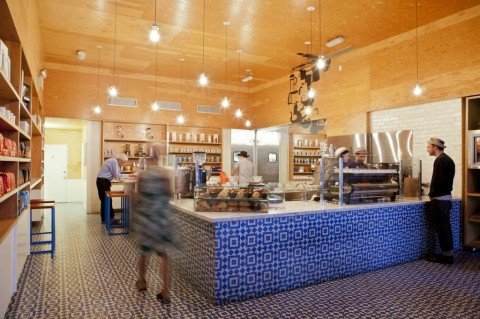 Favorite part of LA to visit for inspiration?

What is your best advice for aspiring designers/architects?

Design as much stuff as you can and try to get it built, even if it’s not financially profitable the experience is invaluable.

Your work originated out of smaller homes on smaller lots. What do you enjoy and what do you miss when working on projects of a larger scale like Toro Canyon?

I love getting out of the city and working with landscape. Usually our in-town projects have very constricted lots so we make all sort of outdoor rooms in a tighter space. When you design in Santa Barbara or Topanga or Bend, Oregon (all places we have built houses), you can actually walk a lot through nature as part of the architectural experience! Also, designing for weather is sort of challenging, but fun, with very different material issues.

You recently designed Dr. Dre’s Beats offices. How do you compare working on residential projects to working on commercial projects? 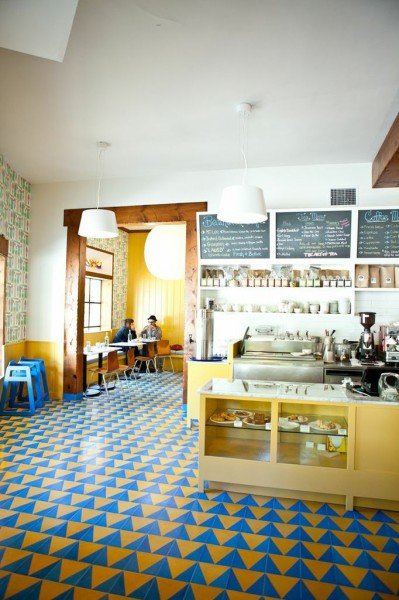 Commercial projects are definitely more self similar -- restaurants, offices, retail -- as they are all about attracting diverse groups of people to a space, keeping them there by being interesting and cool and comfortable and fun. In the workplace, in particular, getting the sense of beauty can be challenging at the same time you are trying to give people desks, but the lovely thing is you can make moments of respite and interior streets where people can hang out, take their laptops and have impromptu conversations. It is a bit like designing a small city -- a place you would like to live and work.

Now that you’ve branched out in to commercial and to larger scale residential, where would you like to next see your practice explore?

I love doing both, so I hope to do one or two houses a year as well as continuing to do commercial work that is challenging and helps rethink how we work today.

I was inspired by a great article called “Unforgetting Women” that came out after the Denise Scott Brown fiasco, to start to be more active about curating and writing about women designers and architects to make sure they don’t get left out of the historical record of our culture. So I collaborated on a show last year about the brilliant Deborah Sussman (designer of the LA Olympics in 1984 -- and that color palette we all still think of as ‘Eighties’) and it was great. I got to meet a real design icon and our show helped get her work more attention at the Getty and LACMA. I hope to do more of that sort of work as a feminist and fan-girl of design.

Learn more about Barbara Bestor and her work at bestorarchitecture.com.