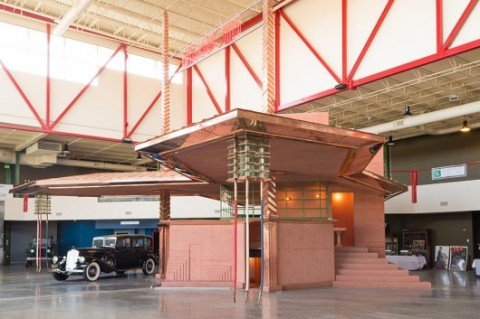 The Buffalo Pierce-Arrow Museum in New York has brought one of Frank Lloyd Wright’s more imaginative conceptual projects to life. Wright’s unbuilt gas station was originally designed in 1927 for his Broadacre City project (also unbuilt). A defining influence of Wright’s imagined city was the automobile. Wright therefore designed this gas station to convey the same impressive architecture that a temple, municipal building, or other more traditional architectural building might.

The gas station installation, which is housed is a beautiful glass and steel atrium, was made possible by a $6.3 million 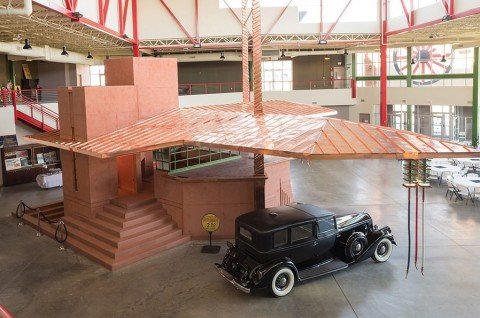 grant from New York State. The salmon-colored concrete structure has a whole lot more amenities and luxuries than we’re accustomed to at gas stations today. It boasts a second-level viewing platform, fancy restrooms, and even a fireplace. The impressive copper roof is bisected by two 45-foot-tall poles which Wright called “totems.”

With its shifting floor-plates, precise decoration, long, narrow structure, and subdued, natural color palette, the gas station’s design is very characteristic of Wright.The museum took liberties to bring the building to life, as well, by including an old car in the exhibition and a neon sign for Tydol, a vintage gas company. 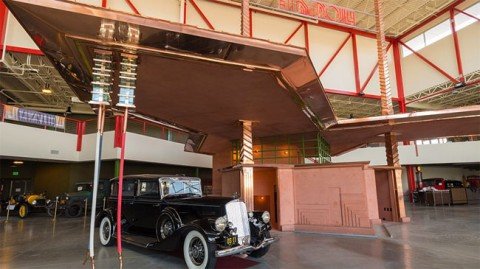 Over the course of his career, Wright created many designs that were influenced by the automobile and car travel. Just imagine the luxury if we were able to fill up at Wright gas stations, and stop at Wright rest stops, if they were even half as fascinating as the Buffalo Filling Station.