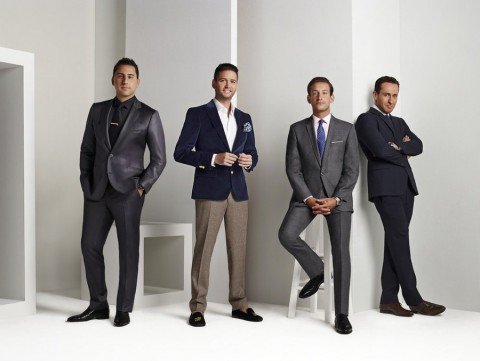 Parnes, who, like Harris, moved to Los Angeles from London, tells Us, "Sometimes I have to pinch myself literally and appreciate that this is real! It's so good — the weather's amazing, the market's amazing, I love the people — everything about L.A. — I'm just completely in love with it."

The two real estate aces, collectively known as the Bond Street Partners, join original cast members Josh Altman and Josh Flagg. Last season was the show's highest-rated season yet, and with bigger homes and bigger commissions on the line, this looks to be the best season yet.

"I think Josh Flagg is a big fan of ours, we love him, he's funny and charismatic,” Harris tells Us. "And Josh Altman, we will remain quiet on our thoughts about him. But I will say he's a hard worker — he's arrogant and we reserve judgment on our comments there."

Harris and Parnes share with Us that they've received great support from The Agency's CEO and co-founder Mauricio Umansky, who's very familiar with the demands of both the real estate business and the world of reality television.

"He'll talk to us about TV but he's really a businessman," says Harris. "He is all business. He's very supportive in every way. We absolutely love him."

Watch James and David give viewers a tour of The Agency headquarters in Beverly Hills below: