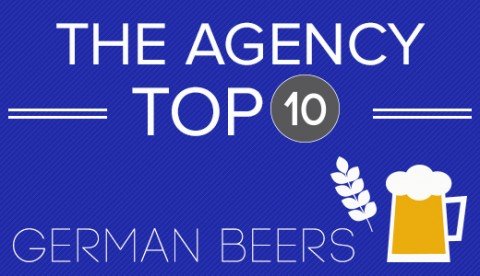 With Oktoberfest right around the corner, there’s no better time to head to the closest biergarten and try out some new German brews. Here’s a selection of 10 of The Agency’s favorites. Prost!

Hefeweizen is a cloudy Bavarian-style wheat brew, and one of America’s favorites. This particular weissbier offers a yeasty sweetness that is light and very refreshing. Plus, as the oldest brewery in the world, Weihenstephan has been perfecting this particular beer all the way back to the year 1040, and it shows.

Another world-famous brewery, Spaten basically invented this brown, sweeter beer. Spaten’s Oktoberfest (the beer is also called Maerzen sometimes) is only available from August until October or November, so get it while you can!

This is more or less the official drink of Cologne. Slightly less bitter than a pilsner, Kölsch is fairly hoppy and fruity, with a pleasant smoothness. It’s traditionally served in smaller 200ml glasses.

This is the original bock (hence the name). Its malty, dark style takes its name from the German town Einbeck, and the local Einbecker brewery has brewed its tasty, strong beer for hundreds of years.

Another favorite bock, Paulaner is a major player in the German beer world, it’s a fine example of this bottom-fermented beer. Richer and darker than a normal bock, this doppel bock has a big palate with aromas of caramel and burnt sugar.

The unique flavor and character of this beer stems from deliberately soured grains. It is tart, light, and very refreshing. Many people like to add fruit or herb flavored syrups this beer, which can make it even more unique.

A wonderfully dark and rich doppel bock, Ayinger Celebrator offers a frothy head and a smooth aftertaste. It’s a very thick beer with many layers of flavor, and the reddish tone is attractive to boot.

The Schlenkeria brewery, near Bamberg, was founded in 1405 and still brews this sweet, malty beer to this day. It’s not always easy to find, but if you can, it’s well worth the price. The unique, smoky aroma comes from exposing the malt to beech smoke.

Gose (goes-uh), is a sour, wheat-focused ale spiced with coriander, salt, and whatever the brewery desires. The ale is an exception to Germany's Reinheitsgebot purity law, since as a regional specialty, it's exempt. For many years, Leipzig was famous specifically for the production of this beer.