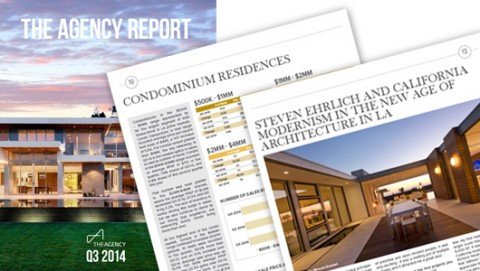 The are two things for certain about the high-end real estate market: 1. cash is king; and 2. foreign buyers seem to have an endless supply of it.

According to The Agency’s Los Angeles Prime Residential Report for Q3 2014, just released today, 60% of foreign transactions in the US have been all-cash in the past year, significantly up from 28% in 2007. In contrast, only about one third of domestic sales have been all-cash. In LA, the largest foreign buyer demographic is from China, who, in the last year, purchased the most real estate as measured by total dollar value. Indeed, the median price paid by Chinese buyers was a staggering 95% higher than the national average.

While the luxury housing market in LA paces towards double digit growth in all of the key benchmarks in 2014, it’s the ultra high-end seeing the most impressive growth. In the nine months ending September 30th, transactions valued greater than $5 million surpassed the number of deals recorded in the past 5 years in every price segment. The strength of the ultra-luxury market reinforces our belief that local and international buyers at the highest end of the spectrum are starting to embrace LA property as an undervalued asset class on the global real estate stage.

How long is this run-up in the market going to last? What LA neighborhoods are leading the way? What new developments are we most excited about? Download The Agency Report: Los Angeles Prime Residential Report for Q3 2014 to find out.