Eye On Architecture: Munich’s “Am Hirschgarten" 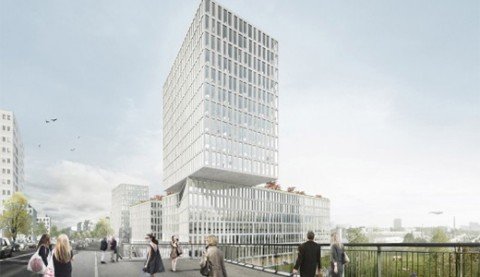 Wiel Arets Architects (WAA) has won a major competition in Munich with their design of four mixed-use towers to be built next to Hirschgarten Station, which opened in 2009. The development project goes by the name of “Am Hirschgarten.”

The interior courtyard of each horseshoe-shaped tower is offset from surrounding public spaces by a stand-alone pergola, which together serve to offer a buffer zone between public and private areas.

The towers’ exteriors are made up of concrete panels with an ornamental, reflective “surface-texture relief,” intended to blend the entire development with its environment by allowing the buildings to subtly mirror the tactile qualities of their immediate surroundings. All parking garages are hidden from view underground, and two of the four offer connecting tunnels between the buildings, which allows for easier access and sharing of utilities.

“The project’s urban planning requirements mandated economical, sustainable, and flexible buildings, whose programming could also accommodate a future conversion–for instance–into residential spaces,” note the architects. “Only steps away from the ‘Hirschgarten’ station along the city’s light-rail lines, and just a few hundred meters from multiple stops along the city’s tram lines, this campus-like cluster of four buildings is able to be swiftly accessed, throughout the entire city.