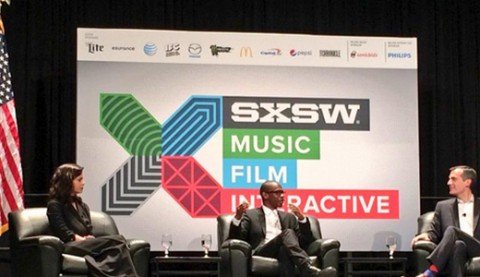 This weekend marks the final days of South by Southwest (SXSW), the music, film, and interactive conference and festival held in Austin, Texas. Since its humble beginnings 27 years ago, the annual event has become a 10-day, art and tech mecca of sorts with a (very) sticky hashtag, attracting tens of thousands to the hip desert town.

Among the visitors was Los Angeles Mayor Eric Garcetti, joined by investor Troy Carter (Washio) and Sophia Amoruso (Nasty Gal), who hosted a panel discussion on using the City as a platform for innovation, technology, and the future of modern urban life. Their talk was heard by a large assembled crowd, with many in the audience streaming the talk via Meercat, the live video mobile app that’s been the talk of the show.

“We [LA] are third only to Silicon Valley and Tel Aviv in terms of speed of startups. When you look at overall tech we are number one—we have more tech jobs in Los Angeles than in any other county in America and more start-ups in LA than in San Francisco,” he tells USA Today in an interview.

Will this woo people to LA’s Silicon Beach and Downtown arenas? Only time will tell. Although so far, companies can’t complain about the favorable weather, roomier office space, and receptive local government, which is encouraging tech start-ups in the area.

To see Los Angeles through a mayor’s perspective, be sure to check out Garcetti’s popular Instagram feed (@ericgarcetti), where he proudly stays away from “ribbon cutting” shots in favor of those beginning and end of day moments that showcase the incredible beauty that this city has to offer.