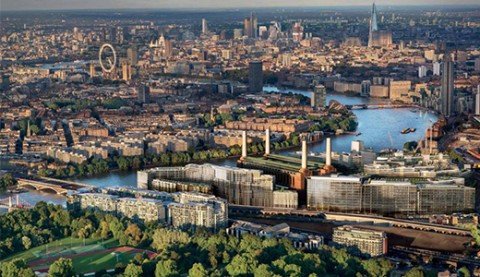 The Battersea Power Station is quite possibly the world’s most significant mixed-use development. Centered around one of London’s most popular landmarks, the venture capitalizes on a history as impressive as its scope. And, with ventures into green technology and rapidly appreciating housing values, Battersea is positioned to be at the forefront of London real estate.

It’s an iconic silhouette to the people of England; four massive white smokestacks looming large over the River Thames. The white vapor emerging from the 101-meter tall stacks helped guide British RAF pilots home through the London fog. Pink Floyd tied a giant pig to the building for the cover to their 1977 album, Animals. And now, after two generations of service providing energy to southwest London followed by thirty years of non-operation, the Battersea Power Station is being reborn. The massive, 42 acre project is centered around the station itself. It will provide 3,992 apartments, three hotels, over 250 shops and restaurants, leisure facilities, and 18 acres of open space. Total redevelopment costs are reported at over $12 billion. Interest in the neighborhood is booming and isn’t slowing down.

The development itself will serve as a new cultural hub for London, with development plans drawn from major cities around the world. A new Underground station being built on a new spur of the Northern Line opens to “The Electric Boulevard,” offering up everything from groceries to couture clothing. Concerts will take place against the Power Station’s facade. Star architects and tastemakers designed many of the spaces, such as Frank Gehry’s “Prospect Place,” Norman Foster’s “Battersea Roof Gardens,” and a bespoke residents’ lounge by David Linley.

The international consortium responsible for creating the Battersea Power Station development is already thinking about how to reduce the carbon footprint of every future resident. They have hired energy company SSE to do a full feasibility study into using water source heat pumps to provide a low-carbon source of renewable heat for their residents.

The Battersea neighborhood is poised to become one of the most desirable places to live in London. Prices for prime property have risen by over 50% since 2009, rental rates are on the rise, and huge amounts of development are taking place. It is small wonder, then, that the residences in the Battersea Power Station development are so desirable that they have already increased in price since the first round of sales in 2013. Upmarket apartments reserved in this first round have already been re-listed for a significant profit. Demand for the Battersea Power Station apartments is so high, in fact, that they are essentially creating their own market.

The Agency has the privilege of representing this amazing property through its rebirth as a mammoth mixed-use development and are now actively selling Phase 3 of the development. These buildings, designed by Norman Foster and Frank Geary range from £1,328,000 to £40,000,000. We have two detailed, full scale models of the Battersea Power Station. Exhibitions have already been held showing the property in Los Angeles, Paris, New York, Shanghai, Hong Kong, Kuala Lumpur, Tokyo, Beijing, Doha and Milan.

The Agency HQ in Beverly Hills will host a private broker's preview of the Battersea development the night of April 14, 2015 between 5:30 and 7:30 PM. A full celebration and sales exhibition by The Agency and Brits in LA will follow on April 16, 2015 from 6:30 to 9 PM. Details to follow for both events.