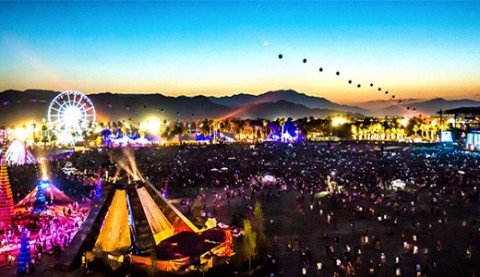 With a massive lineup sure to bring a flush of excitement to the faces of music fans everywhere, Coachella is set to launch festival season into high gear. Taking place on the second and third weekends of April, Coachella is expected to bring around 100,000 bronzed, beflowered party goers to the manicured lawns of the Empire Polo Club. The festival is so popular that even VIP packages costing in the thousands have sold out.

Headliners for 2015 hint at the diversity of music on offer; AC/DC will leave crowds Thunderstruck on night one, Jack White will draw a Seven Nation Army of fans on night two, and Drake is expected to give a Legendary performance on night three. From the Alabama Shakes to Belle & Sebastian, Florence & The Machine to Flying Lotus, fans of all genres will leave satisfied.

Coachella may be the big bang, but we’ll be feeling the aftershocks all summer long in the form of more focused music festivals. Stagecoach caters to country fans in late April, Rock in Rio rocks out in Vegas in May, Electric Daisy Carnival gets EDM fans turnt in June, and Hard Summer and FYF shake up LA in August. It’s going to be a good summer.