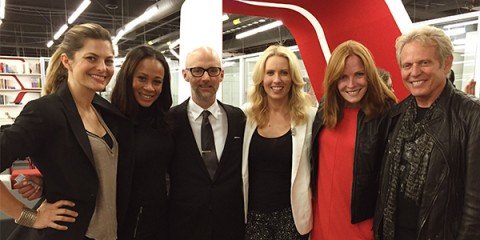 Women of The Agency and Focus Magazine hosted A Night to Inspire, a lively, inspirational event benefiting the Women Like Us Foundation on Thursday, May 28. Held at The Agency’s Beverly Hills office, the foundation’s annual event was a rousing success, raising funds and creating awareness of its incredible work in support of women’s charitable leadership and women around the world.

Representing Women of The Agency, was Kathrin Nicholson, who delivered a heartfelt introduction to the Women Like Us foundation.

“The Women of The Agency was founded to continue the ideals of The Agency, which are collaboration, innovation, integrity and philanthropy. I brought in the Women Like Us Foundation, because that’s exactly what they do,” Kathrin explained. "They find these remarkable women. They help them; they lift them up, give them money, emotional support, and the results are amazing”

Women Like Us Foundation CEO and Founder Linda Rendleman also addressed the crowd, explaining, “We want to raise money so that we can turn around and give it back to women who are changing the world.”

Rendleman’s book, Women Like Us: Illuminating the World, was the inspiration behind not only the charity, but also the upcoming documentary film, co-produced by Catt Sadler and Sally Colón-Petree. Premiering in the fall, the film reflects the women’s personal journeys of inspiration and motivation, featuring compelling conversations with women advocates such as Ida Odinga, former First Lady of Kenya; Caroline Burnett of the Dream Center in Los Angeles; CNN Hero Robin Emmons; teen advocate Deb Myers and more.

The private event raised money for the charity, created awareness of the film and featured fantastic silent auction prizes, music, cuisine and cocktails. In addition to Women of the Agency, several members of The Agency team were on-hand to support, including Paul Lester, Jonathan Ruiz and Kofi Natei Nartey.

Learn how you can support the Women Like Us Foundation. Check out a recap of the event here and more photos from the red carpet here.