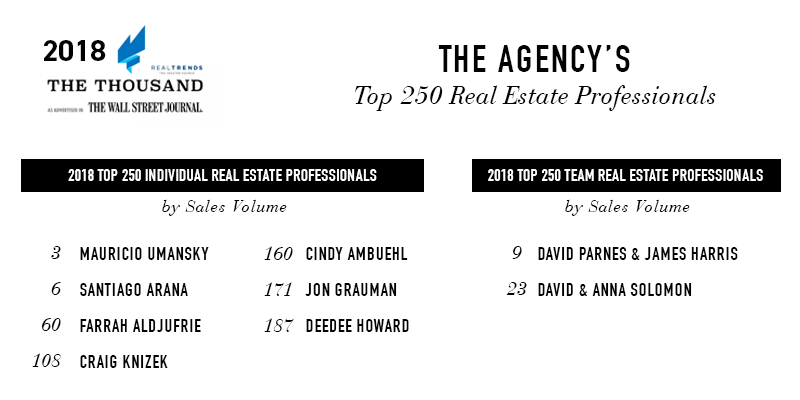 The results are in for REAL Trends’ “The Thousand 2018,” and The Agency is proud to have topped the charts once again with 11 of our own recognized among the best of the best in real estate.

Now in its 13th year, The Thousand recognizes America’s top 1,000 real estate sales professionals and teams, who collectively place in the top one-half of one percent of more than 1.25 million licensed real estate professionals nationwide. In partnership with The Wall Street Journal, The Thousand is widely considered the most prestigious ranking in real estate.

The Agency’s CEO and Co-Founder Mauricio Umansky ranked Number 3 on this year’s list with a total sales volume of over $548MM. This marks Mauricio’s eighth consecutive year placing in The Thousand’s Top 10 (excluding 2011, when he didn’t submit due to Co-Founding The Agency).

Santiago Arana, Managing Partner of The Agency, ranked Number 6 in the country with more than $420MM in sales volume, marking his eighth consecutive year on the charts. Ranking Number 9 on this year’s list of the top real estate teams by volume are David Parnes and James Harris with over $506MM.

Also topping this year’s list were Farrah Aldjufrie at Number 60, Craig Knizek at Number 108, Cindy Ambuehl at Number 160, Jon Grauman at Number 171, Deedee Howard at Number 187, and David Solomon and Anna Solomon, who placed Number 232 on this year’s top teams by sales volume.

“It’s been an incredible year for The Agency. We continue adding to our roster of top-producing agents as we expand into new markets,” says Mauricio. “I’m proud to be recognized in The Thousand’s Top 5, but I’m even more proud to be featured alongside so many talented members of The Agency family whose commitment and hard work have made our company the world-class brokerage it is today.”

View the complete list of The Thousand 2018 rankings here.