Mauricio Umansky and The Agency took to the desert to sponsor the 60th Anniversary Desert Classic, a charitable event that raises millions of dollars for the youth of the Coachella Valley. The lively event in La Quinta, California is part of the PGA Tour’s west coast swing and features four days of pro and amateur play and a star-studded concert series. 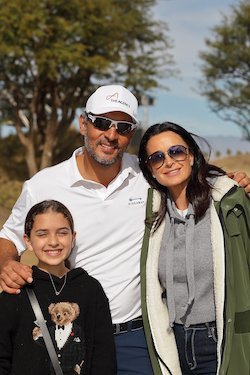 The Agency hosted the executive suite at Casamigos Club 17, the open-air venue located on one of the most iconic holes played during the PGA Tour season. Situated on the PGA West Stadium course, the island green of the par-3 17th hole, known as Alcatraz, is among the most recognized holes in golf. Mauricio was among the amateur players, qualifying all four days of the event. He finished strong in sixth place, shooting 12-under with two finishing scores of 63—winning the adoration of his wife Kyle Richards and fellow members of The Agency team, Rich Nolan and Richard Bartholomew, Managing Directors of the Palm Springs and Palm Desert offices.

“It was an absolute blast to be a part of this incredible event, both as a participant and as a sponsor,” Mauricio says. “I was proud to represent The Agency team at an event that raises millions of dollars for the children of the Coachella Valley.”

The 2019 event raised nearly $1.5 million for charities throughout the Coachella Valley. Over its 60-year history, Desert Classic Charities has donated $60 million to nonprofit organizations that support youth, education and the quality of life in neighboring communities.

Mauricio and The Agency team kicked off the Desert Classic Concert Series with a private VIP dinner and entertainment from Kelley James, followed by performances from headliners Sammy Hagar & The Circle and Bad Company. As for the pro tournament, the PGA tour title was won by 31-year-old rookie Adam Long, playing just his sixth PGA tour event to beat out the two crowd favorites, tournament ambassador Phil Mickelson and Adam Hadwin.