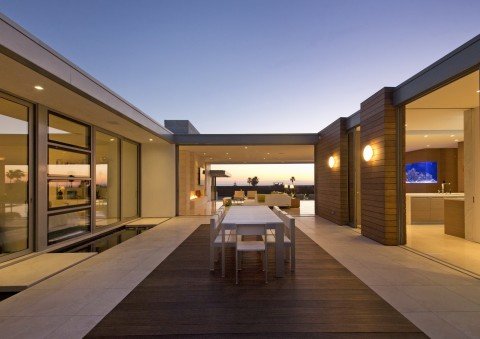 The following interview with award-winning principal of Ehrlich Architects was first published in The Agency Report – Third Quarter 2014.  Steven Ehrlich, principal of Ehrlich Architects, the Los Angeles based firm that has been pioneering the California Modern style and creating dramatic homes and buildings since the early 1980s. The Agency sat down with Steven to speak about his inspiration, his work, and the direction of architecture in LA.

TA: Your style has become synonymous with Los Angeles living. What drew you to the city, and what contributed to your setting up your practice here?

SE: I was actually one of the first architects in the Peace Corps to work in Marrakesh, Morocco in the early 70s. When I left the Peace Corp, I taught architecture at a University in Nigeria. I lived in Africa for 6 years and learned a great deal about the wisdom of the indigenous builders who built very lightly on the land and felt very much in harmony with the environment. I moved to LA in ’77, and I felt the energy of a young city that had a lot of potential and open minded people. It was very exciting - it was a melting pot of multiple cultures, and it attracted me a great deal.

TA: What were one of the first projects you worked on when you moved here?

SE: I was very lucky. My first project was very interesting - it was a photography, painting, and guest house studio on the same property as a Richard Neutra house. It was my first ground up project, a very modest 1,200 SF. and it was photographed when it was completed by Julia Schulman. Before I knew it, I was on the front cover of the New York Times home section. That kind of helped catapult a career into gear… or into second gear let’s say.

TA: What was one of your larger home commissions to follow the Neutra addition?

SE: The exposure from that project led to my first more significant house, which was for Tom and Miriam Schulman, in the early 90s. That was my first really significant house, a much larger scale than the Neutra addition, about 9,000 SF. It was very much influenced by the California modernists, Rudolph Schindler and Richard Neutra. The house had a courtyard that defined the front entrance. I learned to appreciate the wisdom of courtyards having lived in Africa.  At the same time, I was working on a project in Tokyo. I had made four major trips to Japan during the same period of time, and I must say that the tranquility and serenity of Japanese architecture also influenced the design of the house.

TA: What are some of the things you consider when you’re designing houses in the hills?

SE: One of the first things that one needs to do is listen to the land. And you have to listen to the people. From there, the design will evolve. The hills always have a very strong voice in a sense because it can be an up-slope lot or a down-slope lot. Where are you entering - from the top or the bottom? Often if we’re doing something in the hills, it gives the opportunity to have great views and that really is a great opportunity we try to embrace. We are sensitive to exposure of sun, we love lots of light and glass but sometimes it can just be too much of that, too.

TA: What do you think has changed or perhaps improved for the better through technology and engineering over the course of your career?

SE: First of all, the thing that has really moved ahead in a fantastic way is glass technology – it has really made a great leap in the last 10 years. The other thing all of the technologies that are electronic: lighting, control systems, and appliances. There’s also a lot of wonderful things happening with materials that we now can custom cut with lasers. So there’s just a lot more freedom to experiment with.

TA: Los Angeles, because of its climate, has this very revered history for architecture. You look back to the 20s, 30s, and 40s to the architects like John Wolf, Paul Williams, James Dolena, and others from that era. Into the 50s and 60s and you have others like Schindler, Neutra, John Lautner, and the case study program movement. In large part, LA these days, both on the commercial and residential side, is devoid of anything particularly new, exciting, and innovative in terms of architectural expressions. Why do you think we’re lacking in architectural innovation?

SE: I don’t think we are lacking. I guess I would disagree with that. I think LA Is still a petri dish of architectural design. I think that there is still innovation. Exploration. One of the things that we’ve embraced in our higher-end family homes is the light detailing and composition of materials, and the craft really interests us. You can look at the history of Schindler’s King’s Road House, The Lovell house by Neutra, The Eames House in the Palisades. These are all phenomenal legacies that build upon the later modernists like Lautner, Koenig. The list can go on. I think that this lineage, history, and exploration continues here.

TA: Do you feel like that’s carrying through? That this is addressing the single family realm? Do you think that carries through to the commercial and more public buildings as well?

SE: Not always. Many projects do reflect it so some degree, depending on who the developer is, what the price point is. Those things make a big mark. But many projects will embrace a nostalgic point of view. The client will want a Spanish Mediterranean complex, whether it’s a house or a complex. To me that is not the spirit of LA. The spirit of LA is not looking backward, it’s looking forward.

TA: LA has a very bright spotlight on it today, and an incredible influx of people from all over the world are settling here. How do you think that will influence the direction of LA’s architecture?

SE: I believe that people coming to LA from all over the world want to celebrate the LA lifestyle. So part of that is not necessarily burying the kitchen in the back where there will be tons of servants, but it becomes a more casual lifestyle. From what I see from people coming from all over the world, they want to be part of, and understand what it is to be in LA. Having said that, I like to think of LA not only as a global node of communication singularly through the entertainment world, but also as a node of influence to the art and architecture field. I like to say that we’re looking out to the pacific century, because I think that the great influx of influence is looking west rather than east.

TA: Do you think they’ll be looking to make architectural statements?

SE: I think that if there’s a greater interest in celebrating a southern California lifestyle, the best way to do that is with contemporary architecture.