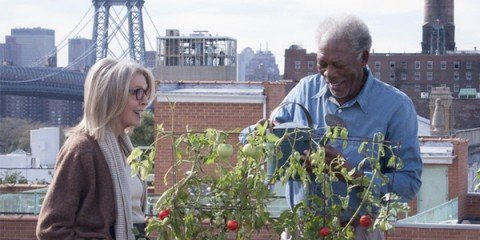 “Five Flights Up,” a new movie starring Diane Keaton and Morgan Freeman, as Alex and Ruth Carver, depicts the drama that takes place when an older married couple try to sell their longtime owned apartment located in a gentrified Brooklyn neighborhood. The real estate broker who has the listing for the Carvers’ residence is Lily, Ruth’s niece, a character played by actress Cynthia Nixon. The dynamic story that ensues is entertaining. As some New York real estate brokers watched “5 Flights Up,” there was laughter. Others expressed horrified reactions to the way that Ms. Nixon represents the profession of real estate.

Traditionally, Hollywood has viewed real estate agents very unfavorably and in this film, real estate savvy individuals will notice the creative license that filmmakers took when painting the personality of certain characters and scenes. In a review written in The New York Times, some real estate agents and brokers confessed their concern that the movie will play to the worries of real life sellers who think that people are going to dig through drawers and invade personal space before a sale actually takes place.

Intended to be a film that portrays a beautiful, longstanding love between a couple, as well as emphasize extreme personalities for humors’s sake, the movie will do little to shake or change one’s opinion regarding housing in New York or elsewhere. Real estate is a subject that absorbs New Yorkers. “I didn’t realize what a topic of conversation real estate is in New York,” said Lori McCreary, one of the movie’s producers.