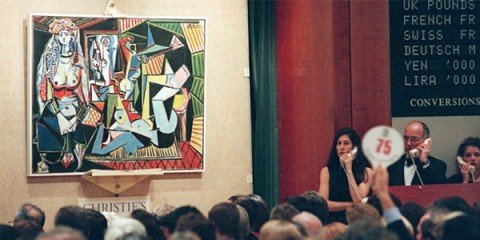 And the award for the richest artwork on record goes to Pablo Picasso, whose cubist creation, “Les femmes d’Agler," sold for $179.4 Million including fees at Christie’s Auction House in New York on Monday. Exceeding its estimated sale price of $140 Million, the 1955 painting depicts a portrait of nude courtesans, a common theme for Picasso, in bright colors and abstract shapes.

The evening's theme, “Looking Forward to the Past”, showcased works spanning the 20th century to a crowd of collectors, admirers and hungry bidders on the other end of telephones. “One can arguably say that this is the single most important painting by Picasso to remain in private hands,” said Olivier Camu, Christie’s deputy chairman of impressionist and modern art. This was also the first time that two works estimated at over $120 Million each were for sale at the same auction.

The previous all-time auction high, also at Christie’s, had been the $142.4 million paid by Elaine Wynn, co-founder of the Wynn casino empire, for Francis Bacon’s “Three Studies of Lucian Freud” in November 2013.

See all the results of the auction here.