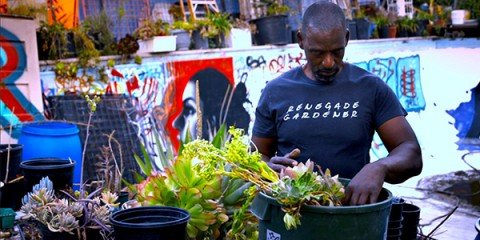 The LA Film Festival comes alive June 10-18, highlighting 74 feature length films, 60 shorts, and more than 50 new-media works from more than two dozen countries. Organized by Film Independent and sponsored by The Los Angeles Times, the program reflects the city’s innovation and diversity through film and will feature master classes, live performances and panels with the festival’s artists.

Festival director Stephanie Allain believes that events like The LA Film Festival are where new talent can be discovered. “Our job is to really showcase artists who are diverse and who have a unique point of view,” Allain said.

The lineup of films set to premiere includes some of the most anticipated titles of the summer including The Diary of a Teenage Girl starring Bel Powley, Kristen Wiig, and Alexander Skarsgard. The Berlin and Sundance Film Festival winner is the story of an adolescent girl’s affair with her mother’s boyfriend in mid-1970s San Francisco. Flock of Dudes marks the big-screen lead debut of comic and Whitney star Chris D'Elia. He plays a hard-partying dude who decides the only way to evolve is to break up with all of his buddies in this ensemble comedy.

Among the festival's documentary lineup is Can You Dig This, about the urban garden movement and the efforts of burgeoning planters and growers in South Central L.A. Other documentary films include Babushkas of Chernobyl which follows a community of unlikely heroines living in Chernobyl’s dead zone, Be Here Now, the story of actor Andy Whitfield’s battle with cancer and In a Perfect World… which looks at the lives of men raised by single mothers.

For tickets and information visit The LA Film Festival's website at lafilmfest.com.