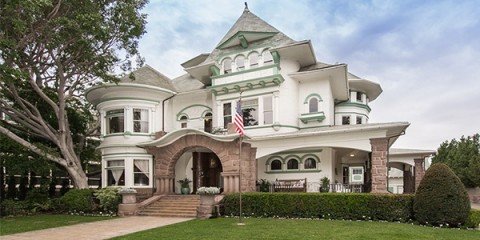 When someone says, “the 1920’s,” you can’t help but think economic prosperity, and opulence, a boom in art and architecture, jazz and major changes to the American social landscape. Those “Roaring Twenties,” as they’re affectionately called, marked a true beginning in American life and technological advances which included everything from the telephone to the automobile. And in the city of Los Angeles this time and these advancements meant movable property. Que the Higgins-Verbeck house.

The Higgins-Verbeck house reigned as  one of the most famous of all mobile homes in California. Originally located at 2619 Wilshire Blvd., this grand--mobile--estate was relocated on June 28, 1924, 91 years ago, to it’s current location at 637 S. Lucerne Blvd in Hancock Park. Built in 1902 by renowned architect John C. Austin, celebrated for iconic  buildings like the Griffith Park Observatory, L.A City Hall, the Shrine Auditorium and The Fremont Hotel,this prized Victorian masterpiece and true architectural gem radiates a spirit of days gone by thanks to a host of windows, lush landscaping and expansive lot.

When still in it’s original location, Howard Verbeck hosted a fanciful soiree for the local elite. Upon arriving, guests mingled and eventually found themselves dancing the night away and socializing--1920’s style--in what was a fully constructed home on Wilshire Blvd. Then, around 11 o'clock they received an invitation to step into rooms illuminated with nothing but flickering stable lanterns. At that point, the crowd was hushed, a signal was heard, and the trucks were off.

The home was being wheeled down Wilshire Blvd. The Higgins-Verbeck home was split into two, due to it’s enormous size, loaded onto trucks, and sent down south ten blocks away. All the while music continued to play and guests carried on dancing, singing and socializing inside of the home. Fast forward 91 years and you’ll still find the home that wheeled through LA in the midst of a party. This architectural masterpiece, which features eight bedrooms and five bathrooms, an expansive terrace, several rooms for entertaining, state-of-the-art modernities and rich timeless craftsmanship, the Higgins-Verbeck home is listed on the market and comes with an intriguing history behind it.