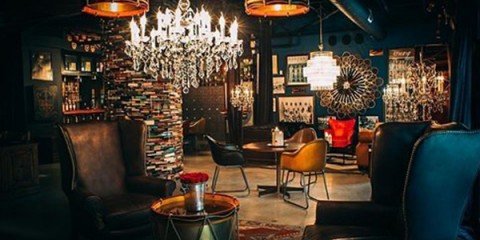 The historic Los Angeles Athletic Club is unveiling a remodel that brings back some of the lost historical features of the building. The recently re-opened Blue Room, located on the fourth floor of the club is a classy lounge area equipped with its own cocktail bar among other one-of-a-kind features. Renovations to the lounge have uncovered a forgotten staircase that was used during Prohibition times and connects the fourth floor hideaway to the third floor below. Guests can now enter the Blue Room via a false bookcase, as if transported back to the age when speakeasies were a standard of the ‘Roaring Twenties.’

LAAC began operating in 1912, and it was where the influential men-only Uplifters Club formed in 1913, which included among its members icons like Will Rogers, Clark Gable, and Walt Disney. The Blue Room is the latest remodel for LAAC over the last few years. Other updates can be seen in each hotel room, directed by the professional design of Tracy Beckmann. Hotel guests are lucky enough to enjoy custom made furnishings, luxurious bedding, roman shades, flat screen televisions, and original art work from the club’s historical vault as well as access to an 80,000 square-foot fitness facility, gorgeous indoor pool, and basketball court.

For more on LAAC and photos of the renovations, click here.