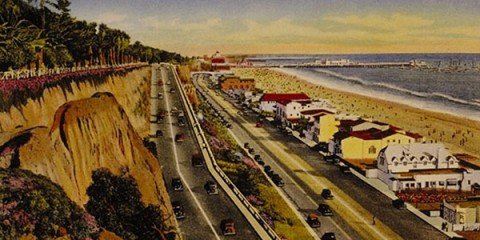 Once known as the “Gold Coast,” Palisades Beach Road in Santa Monica shimmered in glitz and glamour. The Hollywood elite and up-and-coming socialites of the 1920s and 30s flocked to the beachfront paradise. It was where movie stars and creatives like Douglas Fairbanks, Errol Flynn, Greta Garbo and Orson Welles lived or stayed, and musings were penned by F. Scott Fitzgerald.

Today, the once dubbed “Rolls Royce Row” is witnessing an energetic renewal. The spirit of the past is engrained in the present as the long-forgotten, story-rich homes are being transformed into exclusive boutique hotels.

Curbed LA recently took a stroll down memory lane, spotlighting the “cottages” and “beach castles” of Hollywood’s golden era, built by California’s most iconic architects— Wallace Neff, John Byers and Paul Williams to name a few. During its prime, the Gold Coast was where to find the most influential of Hollywood’s elite hobnobbing at California-style, Gatsby-esque soirées. It wasn’t simply the architecture of the eclectic oceanview homes that demanded attention; it was the stars who owned or visited that created a buzz heard around the world.

After falling into a period of neglect, as Curbed LA reports, the historic homes along the Gold Coast are getting another look and being transformed into exclusive boutique hotels, modeled in the spirit of the original design.

Historical properties have a way of inviting homeowners and visitors to be a part of history while allowing an opportunity to write the next chapter in a new narrative. With the transformation of homes to hotels along the Gold Coast, locals and visitors alike will have the privilege of immersing themselves more deeply in a golden history and a bright future.