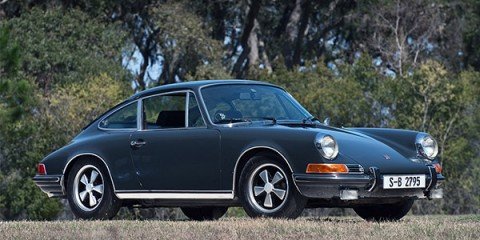 Anyone familiar with Steve McQueen’s love of speed, will tell you none of his sports cars could ever be considered "standard." The actor-cum-racer was renowned for the custom features he personally executed on his classic car collections. His 1976 Porsche 930 Turbo Carrera is no exception to the rule, expected to sell well over the $1 million dollar mark at auction. In the collectible car marketplace, cars enhanced by Steve McQueen himself typically go for top dollar.

“Ownership by McQueen currently adds more value than anyone [else],” seasoned auctioneer Alain Squindo, told Vanity Fair. “He was so cool on-screen, and behind the wheel. Car guys admire him because he was a damned good driver as well—he wasn’t a poseur, he espoused that gentleman racer persona.”

Mecum Auctions will be handling the 930 Turbo at its Monterey auction August 13-15 held in conjunction with the Pebble Beach Concours d’Elegance.

The odometer on The Porsche currently reads over 154,000 miles, but the car appears to be in near mint condition. The engine is an early production, non-intercooled 3.0-liter unit, making for one of the more rare iterations available. McQueen's customizations include a special-order Slate Gray painted exterior and swapped out wheels in favor of +1 rollers measuring 8 inches up front and 9 inches in the back. There’s also a switch on the dash to kill the rear lights, in the event that a Bullitt-style getaway is needed. According to Chad McQueen, the actor’s son, he had the switch installed in case he needed to escape the traffic police on Mulholland Drive.

The car represents the icon, role model, and hero to many. Owner Regalia has committed a portion of the auction proceeds to The Boys Republic “a private, non-profit treatment community for troubled youth."  McQueen was also its most famous graduate and has credited the school with turning his life around.

View more information on the car and Mecum Auction.