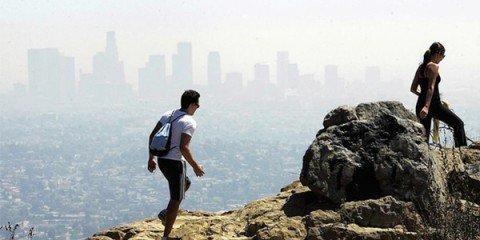 To anyone who owns a pair of running shoes, a city as large as Los Angeles translates into miles upon miles of terrain to explore. So where should you lace up next? To help us compile a list, we asked our agents and staff—many of whom are L.A. natives themselves—to share their favorite running routes and what makes them worth checking out. Whether you prefer mornings to evenings or scenic over strenuous, these top picks will point you in the right direction.

To feel a million miles away, Director of Marketing Cailan Robinson recommends the trail at Tree People, also known as Coldwater Canyon Park, a stop along Mulholland Drive. Offers a great mix of hills and valleys for a true taste of L.A.’s sometimes forgotten wilderness areas.

Head North on La Cienega from 3rd Street, past the Beverly Center, and run up the hill all the way to Sunset Blvd. As you turn around to enjoy a breathtaking sunrise, you’ll also be treated to your own L.A. version of Rocky running up the art museum stairs, describes agent Michael Perez.

For a great workout, agent Jonathan Ruiz runs the perimeter of the UCLA campus, a hilly endeavor totaling just under 4 miles. He recommends that you start and finish at the UCLA track (Drake Stadium), run counter clockwise, then depending on how ambitious you feel, finish with a few flights of stairs at the track.

It’s the array of beautiful homes that attract agent Mireya Rodriguez to her favorite route in Santa Monica. By heading west on Adelaide Drive, between 7th Street and Ocean Avenue Extension, you’ll be treated to one large lot and architectural style after another, including Mediterranean, Spanish and Hacienda styles. Additionally, after passing the Santa Monica Stairs, look north to view all the homes extending from the mountains to Malibu.

For agent Paul Blair, Griffith Park in Los Feliz reveals some of the most amazing views the city has to offer. His route usually begins with an inclined hike up to the Griffith Observatory. Once clearing the tree line, its views of downtown that take center stage, giving you the feeling you could be there in just a few moments. “As I get towards the top near the Observatory, the view opens up to cover all of Los Angeles, from DTLA to the ocean near Venice. One of the best parts of the trail is seeing the famed Hollywood sign—something that should really be experienced by all.”

A tranquil, mostly flat runner’s escape awaits you at the Westchester Fire Road, a trail that licensed assistant Arielle Stuart discovered shortly after moving to Playa Vista. Located directly below the LMU campus, this 2.15 mile run features peaceful sounds coming from the Ballona Wetlands and distant views of the Santa Monica Mountains. Fellow runners and dog walkers roam the trail without it ever feeling too packed.