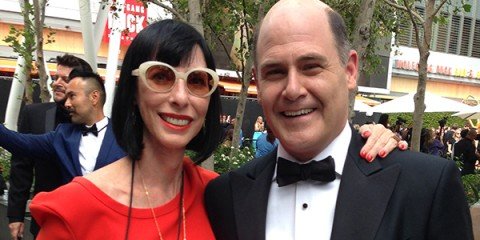 With Emmy week upon us, The Agency’s own Lynda Kahn, a two-time Emmy winner and Governor at The Television Academy is keeping us in the loop of all the award show happenings. Lynda attended the 67th Creative Arts Emmy Awards held on Saturday at the Microsoft Theatre and shared some of her favorite moments of the night.

Lynda says Mel Brooks gave a sweet, sincere tribute to the first award of the show, Main Title Design, which she has won twice. This year’s award, which recognizes the best main title sequence in television programming, was presented to the team from Imaginary Forces for the WGN America series, Manhattan.

One of the emotional high notes of the night was when the winners for Motion Design took to the stage to accept the award for their work on the British-American series How We Got to Now.

“The winners are a talented group of designers from London from a company called Peep Show. They were so appreciative and honored by the experience. It is a game changer for them, as it is for all winners,” Lynda says. "Seeing the joy at the event really makes me proud to be a Governor at the Television Academy."

Another notable win was for  outstanding commercial that went to the spot, #LikeAGirl, directed by Lauren Greenfield. The commercial, which went viral when it debuted last year, took issue with generations of playground taunts about running, throwing or fighting “like a girl”.

Lynda is looking forward to the Primetime Emmy Awards on Sunday and has shared a few of her top picks:

For details and a full list of nominees, visit www.emmys.com.