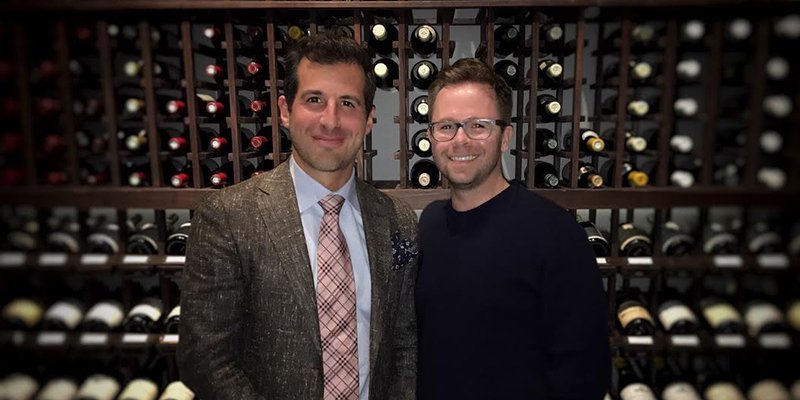 It’s 6:25 p.m. on a Wednesday, and it already feels like Friday evening happy hour. I’m drinking a glass of Chablis at the new Wally’s location in downtown Beverly Hills, just a quick jaunt from The Agency’s headquarters, as I await my guest and interviewee, Chris Miller, former Director of Hospitality and Education at Harlan Estate in Napa Valley.

We became friends working side by side at Spago in Beverly Hills, where, as wine director, he grew the wine list from 20 pages to more than 100, helped Wolfgang Puck achieve Wine Spectator’s “Grand Award,” and personally achieved Master Sommelier Certification. When it comes to wine, he’s bad to the bone, and at a time in my life when I was tasting blindly five days per week, he was guiding, shaping, and overseeing my development. Chris is my mentor, and when he embarks on something new, the L.A. wine world perks up.

Chris, how’d you find your way into wine?

I was waiting tables in college at Emeril Lagasse’s flagship in New Orleans. The floor captains would just say, “Hey, try this.” The wine that did it for me was a random Pouilly-Fuissé. I remember tasting it and my jaw dropped. At the time, I was majoring in finance and accounting with a minor in computer science. Close to graduation, I was working at UBS PaineWebber as an analyst. This was around 9/11 and the resultant market upheaval, and was just a rough time to be in that industry. One weekend, I took a ski trip to Washington, and the powder wasn’t great, so we went wine tasting, and I was hooked. A few months later, I moved to Seattle and started studying wine.

What brought you to LA?

I was working in Seattle at Canlis, "the Spago of Seattle." They’re a Grand Award winner. I was learning to make wine in Washington. My partner on that project was a Master Sommelier, Greg Harrington. When Wolfgang Puck was looking for a new director at his flagship in Beverly Hills, they called Greg and asked, “Who should we hire?” He really pushed L.A. on me. So, I flew down and staged. [This is a working interview during dinner service.] After two days, they offered me the job, which I declined. I liked what I was doing in Washington. They called a few times pressing me for what it would take. We both agreed that what I was asking for was larger than what they planned, although I didn’t let that on then, I didn’t think they’d agree. They called me back a few hours later and said, “You’re hired.”

So that’s it? L.A. by happenstance?

I was hired away to Harlan Estate as Director of Education and Hospitality and to take over for Promontory, their new label.

You’re known as one of the younger Master Sommeliers in the U.S. What prompted that pursuit? It’s debatably one of the hardest tests upon the human will on the planet.

Many people pursue it for ego. And once you have the designation, you can basically write your own ticket. For me, though, it was a real way to learn. It had structure. It was a way to get a comprehensive knowledge. I felt for me to have a real opinion, I had to try it all.

So, with Wolfgang Puck’s flagship, Master Sommelier status, and working on a wine title at Harlan Estate all on your resume, what’s next? What’s left to do?

While working for Wolfgang Puck, I’d been making wine in Santa Barbara. When I went to Harlan, of course, there were non-competes. The second I left, I revived the winemaking project. I spent a lot of time in Northern California. While there, I found a lot of vineyards that I fell in love with. Specifically, because they delivered an outstanding balance which is extremely rare and hard to find in this country.

Hold on. You discovered a secret wine region?

[He laughs.] More like, untapped. Wines have been coming out of Monterey for some time, but I felt that I had discovered the perfect storm of an environment to produce wine which represented the culmination of all that I’d learned and experienced so far.

Wait—Chris, what are we drinking?

Yes, it’s extraordinary. It has so much power and body upfront, but then it quickly manifests into something elegant and structurally sound. It feels like it’s going to hit you in the face, but then just hugs you.

Well, this is my new project, and that description is not going on the label.

Wow! Ok, now I want to know more about where this wine is from: Monterey.

See? That’s what I’m saying. The alcohol is at a good level. There is no need for manipulation. It comes out amazing, with structure, and is inherently balanced. The grapes just come together as they grow. This is a whole other conversation, but a lot of the time, winemakers dump water in to lower the sugar levels. Everything becomes diluted. But then, they use additives to bring those characteristics back.

So, it’s kind of an Old World approach?

Yes, it’s harder, but you get the structure right [first] and then you find the fruit. Most go fruit-first, and figure out the rest later. I get it. Farmers like it easy. With that, a lot of farming is backwards. Fruit first instead of structure first. To me, the fruit is personality. However, the structure is the soul. So many wines from California are kind of empty. Don’t get me wrong, they’re tasty and fun. You want to date them, but you don’t want to marry them. And, our wines are not lacking in fruit. We found a place where we can get everything at once. We feel as though we found a "unicorn" situation.

Okay, so how would you describe Seabold wines?

They’re not wimpy. They have an elegant power. To equate to other regions, the 2014 Chardonnay is similar to Chablis. Our 2014 Pinot Noir is much like a Morey-Saint-Denis. The 2015 Chardonnay is like Chassagne Montrachet and our 2015 Pinot is like those of the Russian River Valley.

Intentionally, each vintage of Seabold will be limited to about 500 cases.

That does it for this edition of the Sommelier Selection. Don’t forget to follow me on Facebook and Instagram for all the latest pockets and Pinots.

Friends of The Agency: Seabold is offering complimentary personal delivery to L.A. residents through the end of the year for full case purchases. Enter “TheAgency” at checkout, and order from Seabold Cellars now.