The Best Places To Spend NYE Around The World 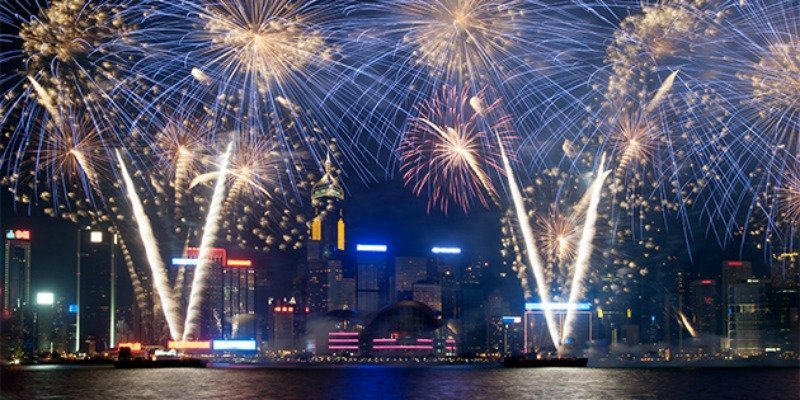 Every year, an estimated one million people from all over the world descend upon Times Square (or huddle around the flatscreen at home) in anticipation of the infamous midnight ball drop. It’s a classic choice for the big night, but New Year’s Eve is as good an excuse as any to pack your bags and head someplace you’ve never been. From a wine-fueled fête on an old train car in Napa to a Big Apple-inspired bash in Hong Kong, here are five of The Agency’s favorite places to ring in the new year across the globe.

There’s no shortage of NYE suppers and parties at Napa’s finer hotels and wineries—and certainly plenty of Pinots and Cabs to go around—but we can’t help but be taken by the idea of counting down to 2017 aboard an old railway car on the Napa Valley Wine Train. Guests are welcomed at the station with wine and hors d’oeuvres and treated to a three-and-a-half-hour journey, complete, of course, with food, wine, and a champagne toast at midnight.

Aussies certainly know how to party, which is why Sydney tops our list of the best places to spend New Year’s Eve. The city plays host to one of the world’s largest celebrations, with more than a million people heading to the famed waterfront for an annual air and water show, which features aerial acrobatics, a fire tug water display, harbor parade, and not one but two massive fireworks displays—including one for those early birds who can’t quite make it to midnight.

If you’re looking to shake up your New Year’s a bit, you might not get any more outlandish than frenetic Hong Kong. Victoria Harbour is the setting for one of the most dazzling fireworks displays of all, and their New York-inspired ball drop celebration will satisfy any regret over missing the party back in the states. Plus, the city’s incredible—not to mention incredibly tall—buildings make for fabulous lookout spots. Your best bet this year? A Great Gatsby-themed bash at Ozone Bar in the Ritz-Carlton, which is being advertised as the world’s highest countdown party.

When you hear someone talk about New Year’s in Reykjavik, the phrase “by the people, for the people” is almost always part of the conversation. A traditional New Year’s Eve celebration typically begins with a festive family dinner, followed by a visit to a local brenna (or bonfire) where visitors cleanse themselves of bad juju from the previous year with their nearest and dearest. And while there are no city-sponsored pyrotechnic displays, the locals more than make up for it with their DIY spirit, setting off around 500 tons of fireworks. Our favorite thing about Reykjavik’s NYE, however, is what happens after all the partying: a late night dip in the local hot springs—the perfect antidote for a hangover.

If you’re not a fan of Auld Lang Syne, you probably don’t want to set foot in Edinburgh around the New Year. The infamous ditty was written by a Scott, and locals are prone to taking to the streets for four days leading up to the 1st, belting out the tune with torchlights in hand. While fireworks aren’t as big of a deal as they are in Reykjavik, there’s still plenty of entertainment and traditions to go around, including multiple concerts and a huge street party on Princes Street. New Year’s Day comes with its own set of amusements, such as the annual Queensferry Loony Dook charity event, where you can watch the town’s daringest jump into the freezing water for a good cause, and “first-footing,” a tradition which requires the first guest of the New Year to bring their host a gift, which the host repays with a stiff cocktail.