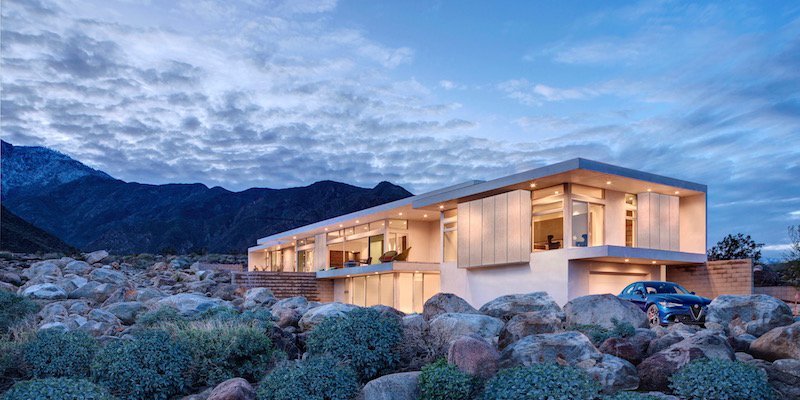 The Agency was thrilled to take part in one of the world's most fascinating and unique festivals, Modernism Week, which recently wrapped its signature February event in Palm Springs. The annual celebration of midcentury modern design, architecture, art, fashion, and culture featured more than 250 events, including architectural bus tours, lectures, and signature home tours. The Agency was on-hand for the much-anticipated debut of Desert Palisades, the last hillside enclave situated along the storied, sun-drenched landscape of Chino Canyon. 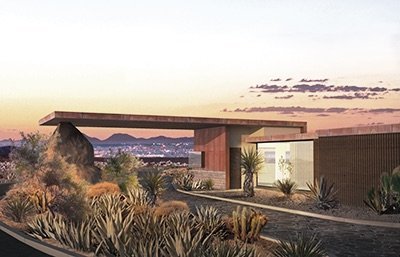 Poised to become the new model for extraordinary, modern architectural vision, Desert Palisades is a collection of 110 homesites, each appointed to preserve the natural contours of the land, engage with the stunning, boulder-strewn topography and maximize views that stretch from the San Jacinto Mountains to the Salton Sea. Unlike the typical, master-planned, cookie-cutter community, Desert Palisades is the first community that from the ground up will uphold the ideals that represent the very best in midcentury and contemporary architecture in Palm Springs. Residents are encouraged to enlist the world's top architects to customize their homes while adhering to a set of forward-thinking, resource efficient, environmentally sensitive community guidelines.

Nearly a decade in the making, Desert Palisades opened its gates to the public during Modernism Week, setting the tone for its architectural vision from the very start. The entry gate (above) displayed inspired midcentury design by Sean Lockyer of Palm Springs-based Studio AR&D Architects. The structure features large expanses of glass, steel and mahogany paneling, while a 34-foot cantilever extends over the road, suspended above a 12-foot boulder, immediately showcasing the community's juxtaposition between the natural and the manmade. 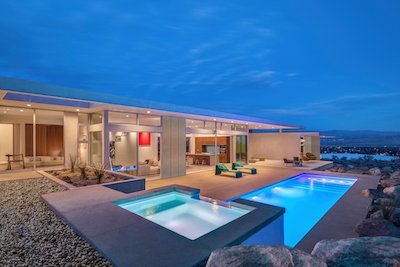 The enclave's first two homes opened their doors in time for Modernism Week, displaying the architectural vision Desert Palisades aspires to represent. Desert House No. 1 was designed by renowned Palm Springs-based architect Lance O'Donnell, who has been credited with carrying desert modernism into the 21st century. It harmonizes eloquently with the landscape, featuring contemporary, split-level design with open, airy interiors that seamlessly transition to the outdoors. The recent focus of a spotlight in Palm Springs Life magazine, the home appears light and low on the land yet lives large, offering more than 3,600 square feet of living space amidst sweeping desert and mountain views.

The second home featured within Desert Palisades is based on never-before constructed plans by famed midcentury modern architect, Al Beadle, whose designs, nicknamed "Beadle Boxes," were famous for their structural simplicity. Modernism Week guests toured the nearly completed home, the result of a collaboration between O'Donnell and Developer & Builder Mike Yankovich of Better Built Inc., who personally asked the late architect's wife for access to the Beadle archives. The Beadle House, also recently featured in Palm Springs Life, appears to float above the Desert Palisades landscape, featuring a sleek, rectangular structure set upon a pedestal-like foundation. 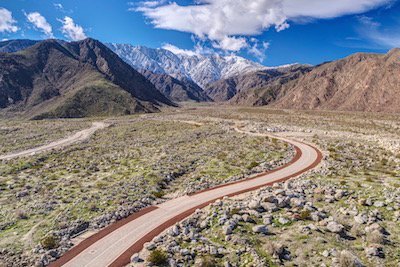 In addition to touring the first residences in Desert Palisades, guests of Modernism Week enjoyed the chance to stroll or drive through much of the community, taking in its varying view lines, which can encompass desert cacti, palm trees, dramatically sloping green hillsides, desert floor and snow-capped mountains from any one homesite. Also on display was the community's commitment to preserving the beauty of Chino Canyon through meticulous attention to detail, from the hand-laid bricks that adorn its roads to the unobtrusive bridges constructed of cable affixed between two boulders.

Desert Palisades is situated three minutes from downtown Palm Springs, where The Agency is set to open a new office in the coming weeks. The city remains an icon in the architectural fabric of the Southwest and has maintained its character and creative spirit as development in the Coachella Valley has expanded over the years. Desert Palisades represents the next frontier in Palm Springs' rich architectural heritage while bringing fresh perspective, inspiration and architectural innovation to the region.