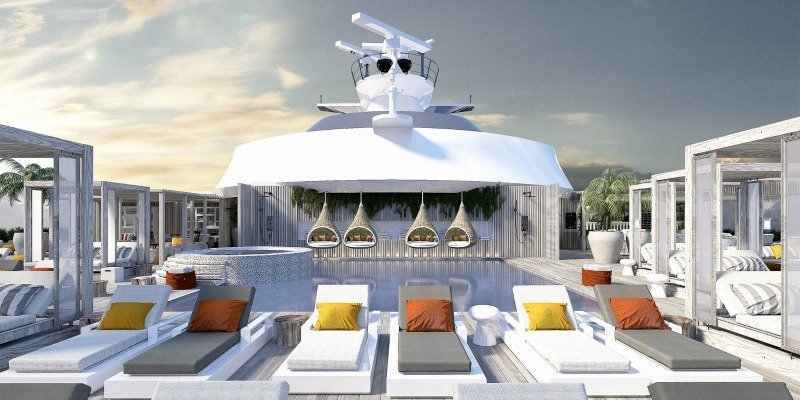 If the mention of a weeklong Caribbean cruise evokes haunting premonitions of bad Hawaiian shirts and awkward group dinners, you haven’t heard of Celebrity Edge, a new line of luxury cruise ships poised to change everything you thought about cruising.

An offshoot of Royal Caribbean Cruises, the five-billion-dollar fleet will be the first to feature “Infinite Verandas,” a cutting-edge design that effectively brings staterooms as close to the ship's edge as possible—rendering once-revered balconies obsolete. Guests need only push a button and the cabin’s floor-to-ceiling windows retract, so they can take in sweeping ocean views from the comfort of their king sized beds. The newly reimagined design also increases the staterooms floor plans by an average of 23 percent—with bathrooms getting an extra 20 percent of much-appreciated elbow room.

Beyond the staterooms, the ship’s designers incorporated a special feature called the “Magic Carpet,” a roving tennis court-sized deck that serves different purposes and levels of the vessel throughout the day—from a sleek disembarkation point on Deck 2 to an upscale restaurant suspended over the sea on Deck 16.

Additional features include six duplex villas with private plunge pools, access to a private sundeck with its own lounge and restaurant, cashmere mattresses from Italy, Bulgari bath products and butler service; an all-weather adult pool; and a rooftop garden for everything from morning yoga to twilight jazz and midnight movies.

The first ship’s maiden voyage will depart from Fort Lauderdale, FL, on December 16, 2018 for a weeklong jaunt around the Caribbean. For more information, visit the Celebrity Edge website.