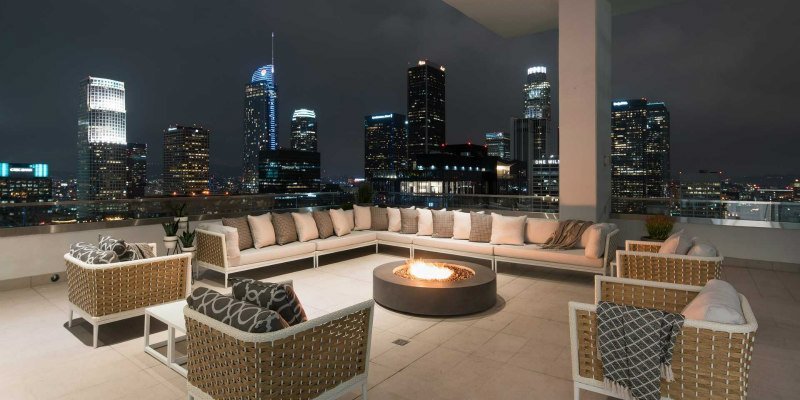 As vertical living attracts a new wave of residents in Los Angeles, Downtown has solidified its standing among the city’s most sought-after markets. Its latest claim to fame? 888 S. Olive Street, an 18,000-square-foot luxury penthouse—currently one of the most expensive penthouses available for lease on the Los Angeles market—listed for $100,000 per month.

Represented by The Agency’s Kerry Marsico and The Agency Development Group, the sprawling, four-bedroom, ten-bathroom residence is perched atop LEVEL Furnished Living’s 34th and 35th floors and boasts 13-foot, floor-to-ceiling windows that showcase sweeping, 360-degree views of all of Los Angeles. Located in the heart of Downtown’s thriving South Park district, the penthouse is just moments from  STAPLES Center, LA Live, Downtown’s art, fashion and financial districts and a plethora of upscale restaurants, bars and lounges.

“There’s no question Downtown Los Angeles is flourishing,” says Kerry. “Having represented Downtown real estate for years, it’s exciting to see the amount of growth and development happening there. It has become L.A.’s hub for culture and entertainment, and the penthouse represents a new and exciting chapter for DTLA, firmly establishing its foothold as one of the city’s most exciting and in-demand neighborhoods for residential real estate.”

One of Downtown L.A.’s top-producing agents and foremost neighborhood experts, Kerry joined The Agency in January. A true pioneer of the Downtown market, Kerry launched TheDowntownMLS.com, which quickly became the top destination for homebuyers seeking lofts and condos in the greater Los Angeles area. He joins The Agency from Coldwell Banker, where he ranked #1 in sales volume among agents in Downtown Los Angeles since 2015 and was recognized among the top 1% of producers globally.