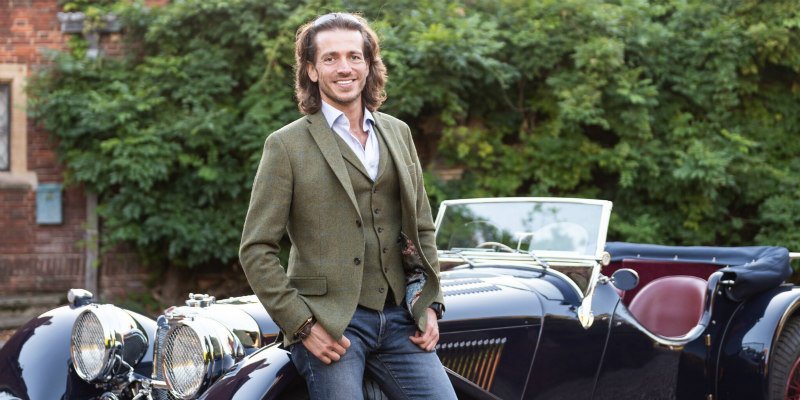 In the latest installment of Gideon’s Roadshow, the auto enthusiast and real estate aficionado traveled to his native England, where he paid a visit to three magnificent homes in Surrey—from three vastly different eras. When it came to his ride, Gideon opted for something old, something new, something borrowed… and something (indigo) blue: a Suffolk Jaguar SS100 by Suffolk Sportscars. Learn more about Gideon’s stunning stops—and sleek ride—in the exclusive video below. 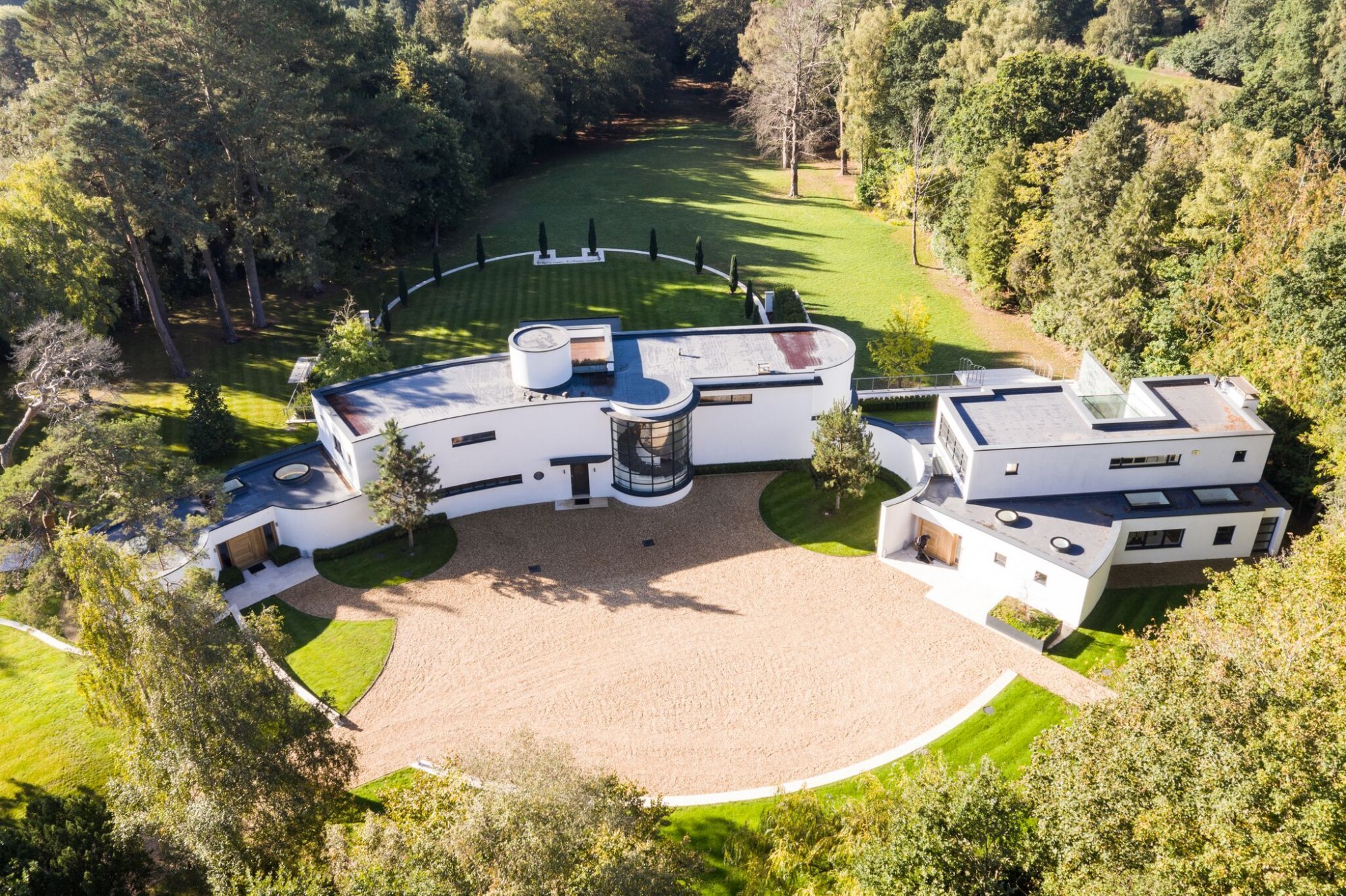 Gideon’s first port of call was Cherry Hill, a 1935 modernist gem designed by famed British architect Oliver Hill, who had been mentored by Sir Edwin Lutyens. The property was acquired by US Ambassador John Hay Whitney and his wife Betsey Cushing Roosevelt Whitney, as the country residence where they would entertain the likes of Winston Churchill and Princess Margaret. Together they renamed the estate Cherry Hill, after the country club where Ambassador Whitney played golf with President Eisenhower. Gideon was met by Tejit Bath, who along with his brother, had meticulously restored and upgraded the estate. Tejit’s broad smile at the sight of Gideon’s retro-roadster revealed his passion for 1930s design and detail, and made apparent how he had become so enamored by the art deco wonder of this home.

Situated on an impressive 4.1 acres at the heart of the Wentworth Estate, best known today as the home of golf’s Ryder Cup, the 14,506- 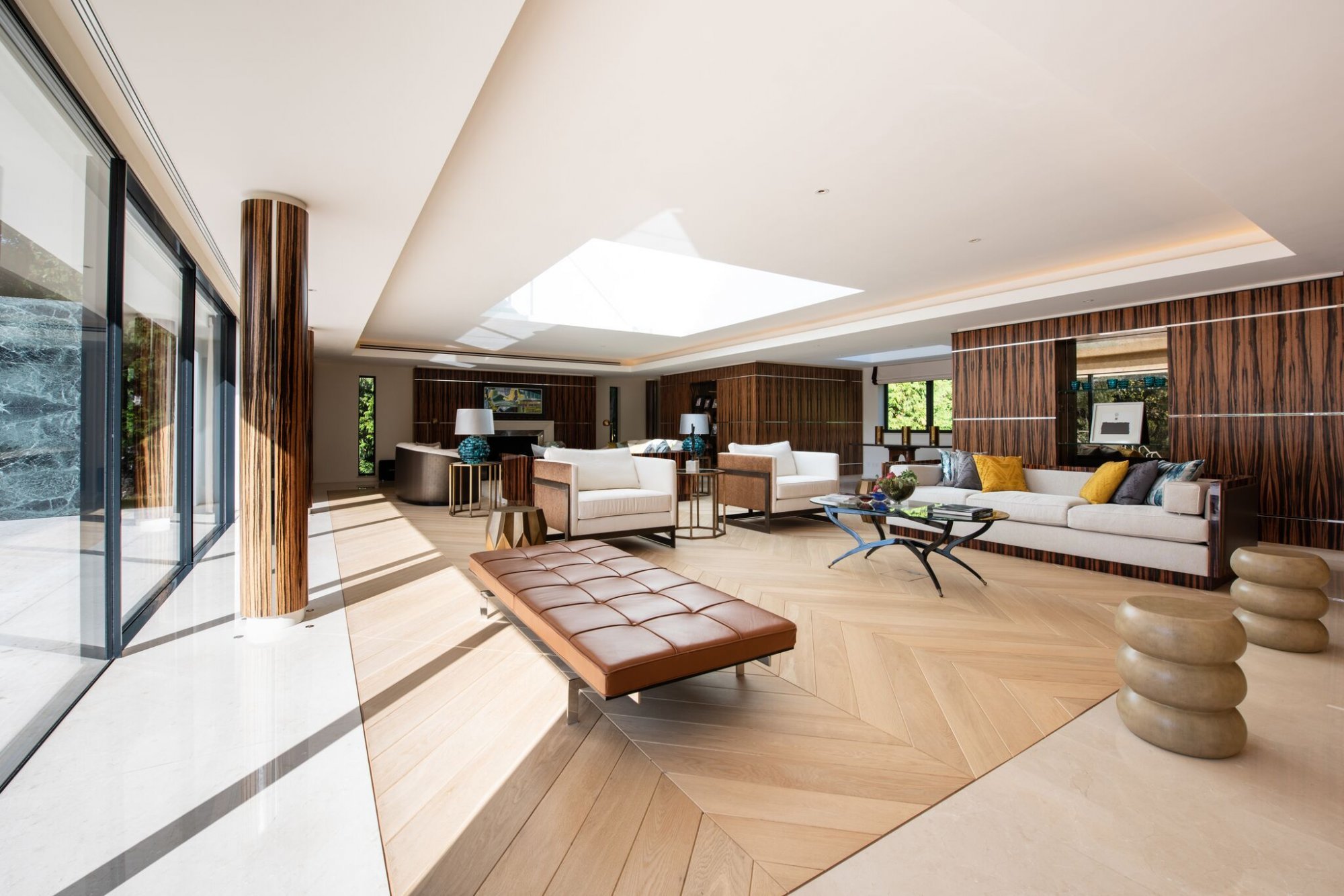 square-foot residence boasts six bedrooms, six bathrooms, and all of the modern amenities one would expect of such an important residence, including a subterranean swimming pool hidden beneath a descending ballroom floor. Offered at £30,000,000 (approximately $39,250,000), Cherry Hill, with its illustrious history, modernist design, and spectacular restoration, represents the finest of homes for sale on the Wentworth Estate. 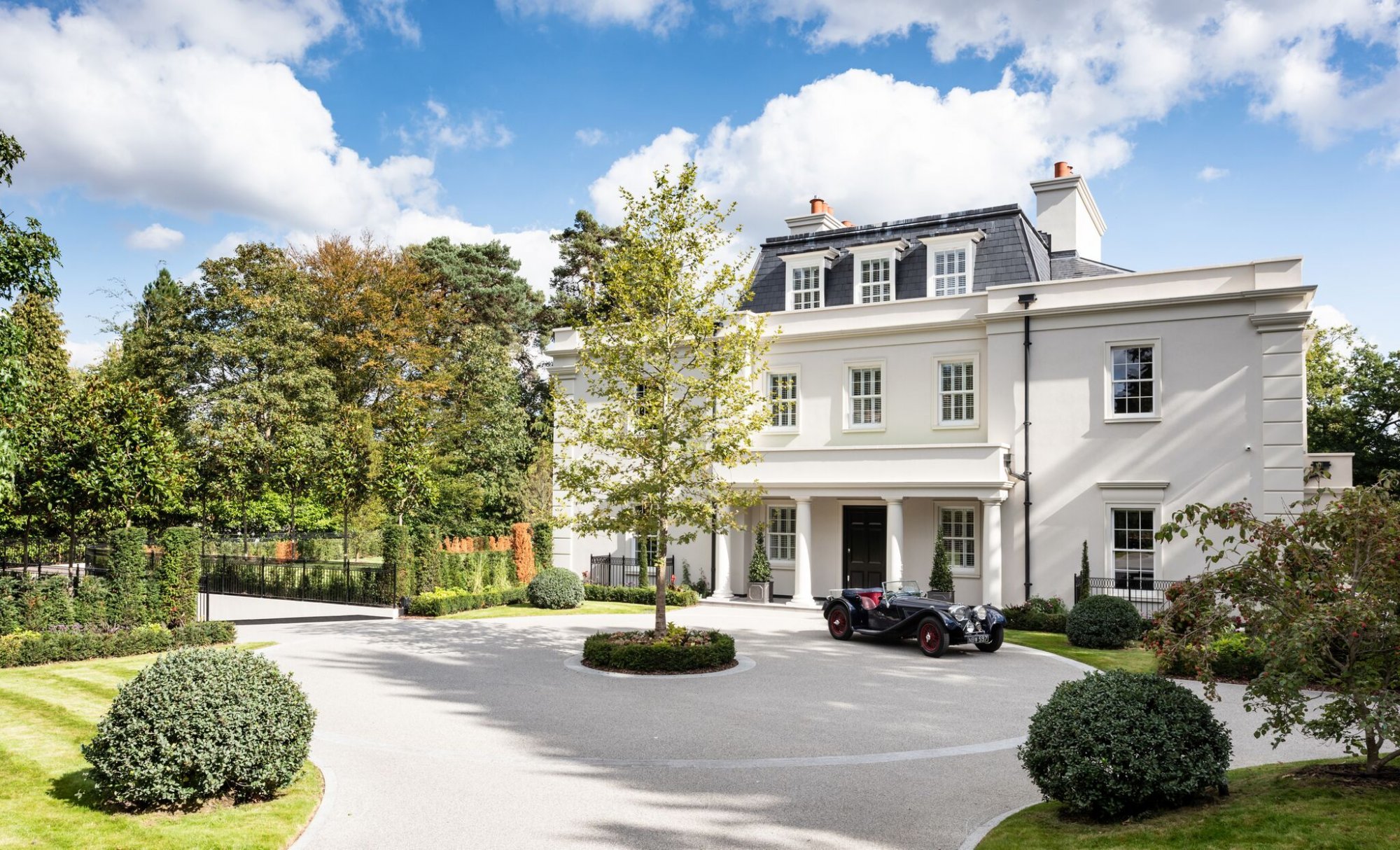 Gideon’s second stop of the day was at Wilton House. Located in St. George’s Hill, the property can lay claim to having been the first-ever development that combined a golf course with luxury residences. Renowned as one of the most prestigious clubs in the country, the 16-acre lakeside St George’s Hill Tennis Club offers thirty-two courts, four squash courts, a gym, studio, pool, spa, restaurants, creche and beauty salon.

Having been home to the likes of Elton John, Kate Winslet, and Chelsea legend Didier Drogba, the 964-acre St George’s Hill takes security 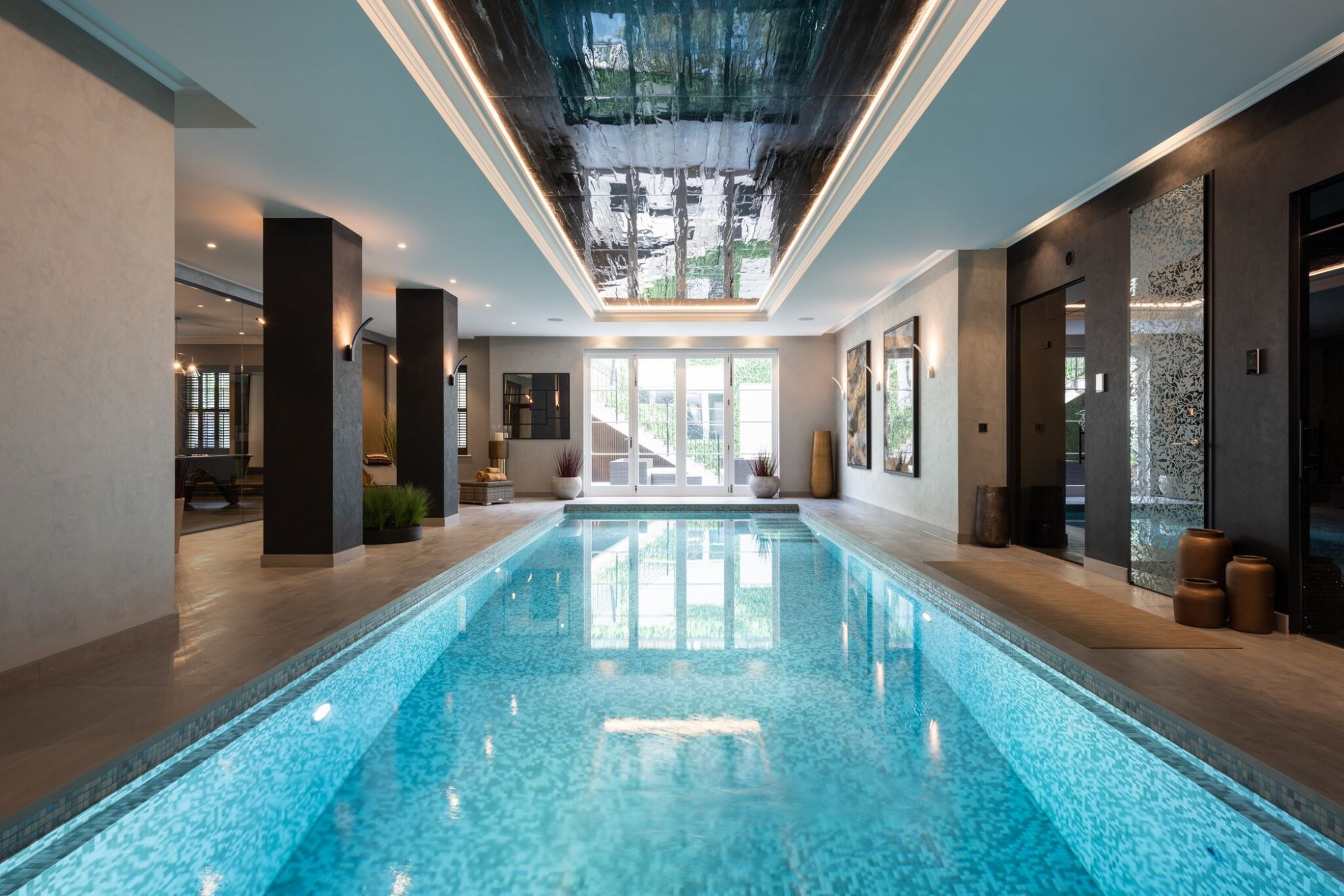 very seriously, with entry and exit via 24/7 guarded booths and ample CCTV. The newly built Wilton House sits on 1.2 acres and boasts six bedrooms, six bathrooms, and a fully-equipped, subterranean entertainment level, complete with bar, pool, screening room, and eight-car auto gallery with turntable. Wilton House is on the market with a guide price of £11,000,000 (approximately $14,500,000). 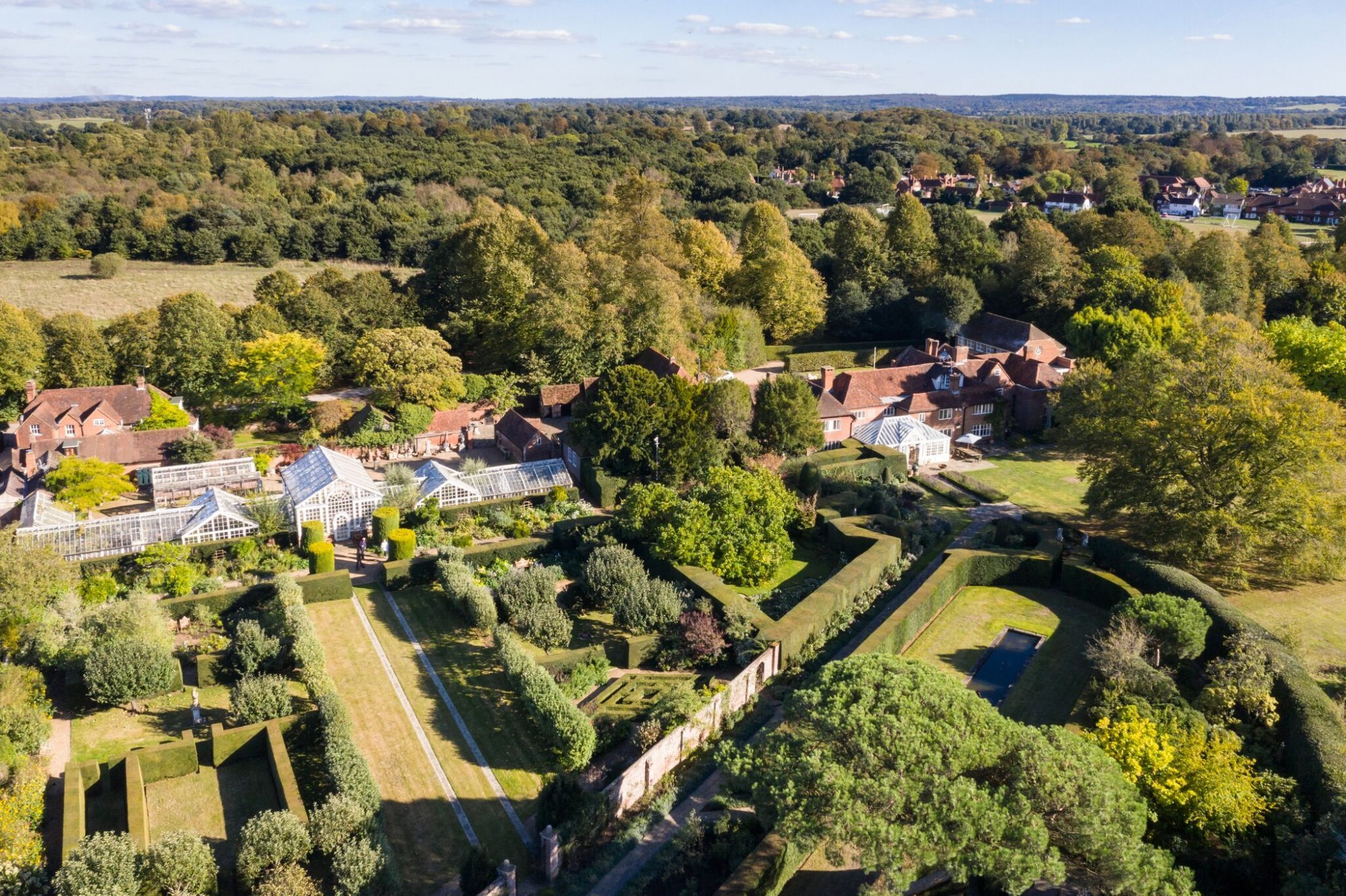 Last but by no means least, Gideon pulled up to his final property of the tour, Dunsborough Park. On passing through the cobble-paved, Wisteria-covered gatehouses, Gideon began his proverbial journey back through time, as the earliest records for the property date back to the 12th century. Over the years, the estate has played host to some of Hollywood’s brightest stars, including Frank Sinatra, Shirley Bassey and Elizabeth Taylor, who is believed to have spent one of her wedding nights at Dunsborough Park. Today, the property is owned by Baron Dolf and Baroness Caroline Sweerts de Landas Wyborgh. Under their ownership the gardens have been redesigned by Penelope Hobhouse and Rupert Golby, and are now regarded as amongst the finest of private gardens in England.

Following an extensive tour of the grounds and home, the sun began to set on Dunsborough Park, and Gideon jumped aboard his trusty 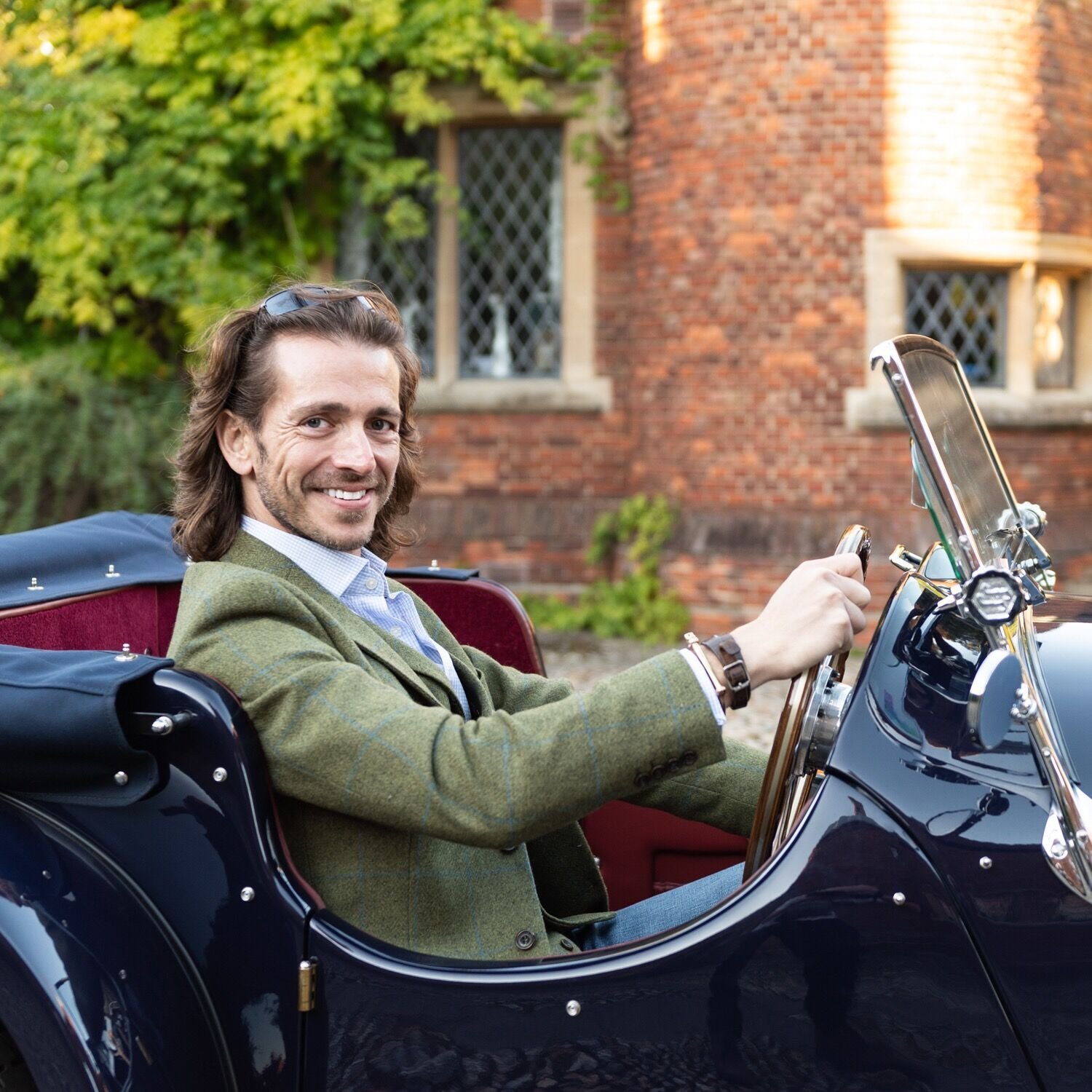 SS100 and headed back to Virginia Water station. It was hard to believe that this 108-acre, magical piece of living history, also lay only half an hour from central London. With a guide price of £17,000,000.00 (approximately $22,500,000), the property awaits a new owner to enjoy and contribute to the story of this 800-year-old estate.

Founded in 1995 by Roger Williams, Suffolk Sportscars set out to create true copies of the original SS100 Jaguar, while using modern XJ Jaguar components. Today the company also produces the Suffolk C-type, replicating the 1951 Le Mans winning race cars. These hand-built vehicles are the highest quality replicas of the originals, each taking approximately six months from commission to completion. Powered by a 4.2litre Jaguar XK engine, they produce 250hp, run 0-60 mph in 8.2 seconds, and have a top speed of 115mph. The end result is a vehicle that maintains the look, style, class and panache of its day, whilst offering the drivability of a modern sports car. For more information, visit Suffolk Sportscars website.