The Agency Agenda Arizona: What to Do + Where to Go This April

Our picks of places to go and things to do to make the most of your month in Arizona. 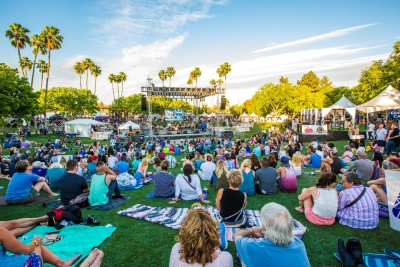 CHECK THIS OUT - Country Thunder, one of the country’s most anticipated country music events, returns to Arizona this month with a lineup that will make fans swoon, including performances by Chris Stapleton, Tim McGraw, Dierks Bentley, Brett Eldredge and more, plus food trucks and camping for the more adventurous. April 11th to 14th, tickets from $75.

CELEBRATE PRIDE - Featuring over 150 performances on six stages, exhibitors, food, shopping and more, Phoenix Pride festival has been organizing marches, rallies and events to celebrate the Phoenix LGBTQ community for almost 40 years. If you can’t make it the whole weekend, be sure to mark your calendar for the annual Pride Parade on April 7th! April 6th & 7th, tickets from $25.

SIP & SWIRL HERE - The Original Taste, the Valley’s premier food and wine tasting event, combines more than 40 of the Valley’s best restaurants, 50 wines from around the world, beer, spirits and entertainment for an evening at the Scottsdale Waterfront to benefit youth programs across Arizona. April 6th, tickets from $125.

SHOP HERE - Scottsdale Fashion Square just got posher with the debut of its new luxury wing, featuring new shops by Saint Laurent, Trina Turk | Mr Turk, Breitling and more, along with mall mainstays Louis Vuitton, Gucci and Jimmy Choo, plus a host of new upscale eateries—including Nobu and Ocean 44—set to debut later this year. The mall’s north entrance was reimagined with a two-story marble entry crowned by a grand, crystal chandelier and replete with a luxury valet, valet lounge and luggage holding for fashionable tourists who need to stow their gear during a pre-flight shopping spree.

SOAK UP CULTURE - In celebration of its 20th anniversary, Scottsdale Museum of Contemporary Art premiers Now Playing: Video 1999-2019, a collection of video art sampled from the last 20 years. The exhibition features works by 11 international artists, including Mark Bradford, Candice Breitz, Petra Cortright and Song Dong, transforming the museum—a former movie theater—into “a space dedicated to the moving image.” Through May 12th.