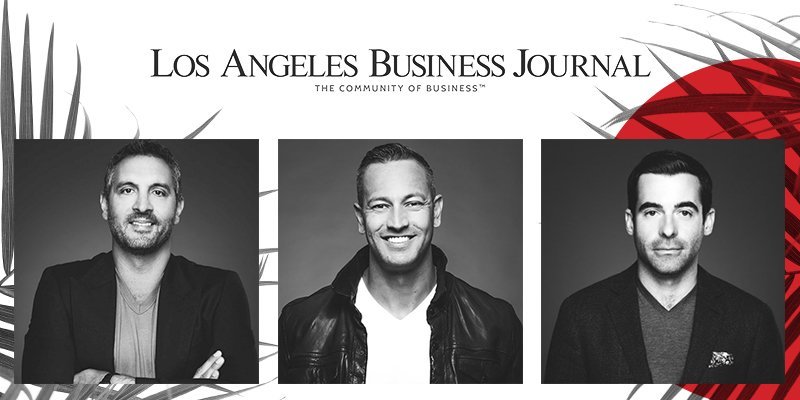 Each year, the Los Angeles Business Journal recognizes 500 of the most influential people in the city; out of 10 million people, we’re proud to announce that Mauricio Umansky, The Agency’s Founder and CEO, and Santiago Arana, Managing Partner, were recognized among the publication’s exclusive LA500.

We’re also pleased to share that our Chief Operating Officer & Chief Technology Officer, Shane Farkas, was named a finalist in the Rising Star category of the publication’s esteemed CTO awards. As part of The Agency’s founding team, Shane has played an instrumental role in developing our operational systems and processes, spearheading the development of industry-leading proprietary software platforms for our residential and New Development divisions.

“Not surprisingly, the people who comprise this year’s LA500 are featured players in the city’s development,” notes Scott Robson, editor of LABJ. “Their vision, energy and resourcefulness are on full display as they bring about changes to Los Angeles that run from the subtle to the seismic.”

No strangers to the elite list, this year marks Mauricio’s fourth time on the LA500 and Santiago’s second. In addition to serving as The Agency’s Founder and CEO, Mauricio has represented some of the world’s most exclusive properties, including the Playboy Mansion, the Walt Disney estate and residences owned by Michael Jordan and Prince. He was named #10 on LABJ’s list of residential real estate agents, with $269 million in sales in 2018.

With $340 million in sales in 2018, Santiago ranked #7 on LABJ’s list of residential real estate agents. He has closed more than $2 billion worth of real estate sales in his career, and has discreetly represented the likes of LeBron James, Lady Gaga, Larry David and numerous executives. He has set a number of records, including the highest price-per-square-foot sale in the Beverly Hills Post Office area, highest-priced sale in Santa Monica, and highest-priced sale of a single-family home on Sunset Boulevard west of the 405.