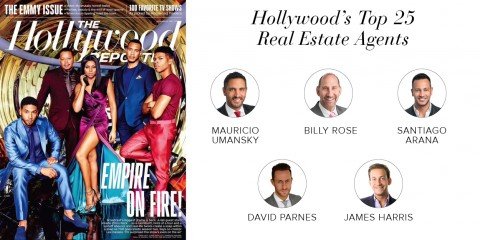 The Agency is honored to be recognized once again by The Hollywood Reporter with five of our agents among this year’s list of “Hollywood’s Top 25 Real Estate Agents”. The annual ranking is made up of top-producing agents selected based on “their client rosters and killer deals”.

Making the list for the third year in a row are The Agency’s co-founders, CEO Mauricio Umansky and President Billy Rose, as well as Principal and Managing Partner of The Agency's Brentwood office, Santiago Arana. Also gracing the Top 25 is the powerhouse team of James Harris and David Parnes of “Million Dollar Listing Los Angeles” fame.

Below is what The Hollywood Reporter had to say about our agents in the top 25:

Santiago Arana - The Bolivia native, who moved to the U.S. short-term to learn English but decided to stay when he found his calling in real estate, was part of the team that sold author-screenwriter Victoria Foyt and director Henry Jaglom's Santa Monica home at 609 E. Channel Road — used in Beverly Hills Cop — in July for $23 million, one of the top sales to date in Santa Monica. "I'm definitely having the best year of my career by far," says Arana. He also represented the buyer of Michael Strahan's $21.5 million Brentwood home and sold Dan Romanelli's Malibu estate to Lady Gaga for $23 million.

James Harris and David Parnes - Harris and Parnes closed more than $200 million in sales during the past year, including a promontory view property in Beverly Hills to Kris Humphries for $6.2 million. The pair, now regulars on Million Dollar Listing, became friends in their native England before moving to the U.S.; they got their start in real estate by cold-knocking on doors nearly four years ago.

Billy Rose - The president and co-founder of brokerage The Agency has worked with such clients as Kim Delaney and UTA chairman Jim Berkus this year. He sold Ryan Phillippe's 8,200-square-foot former home on Rising Glen Road for $15 million, a record-breaking price per square foot for the Sunset Park neighborhood.